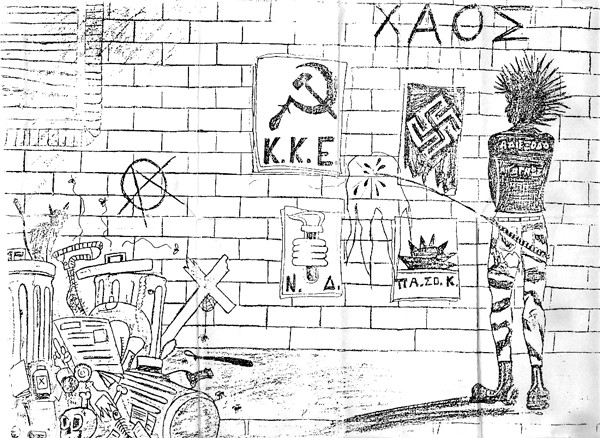 The band, formed in Athens in 1984, was composed of Takis Koulis (drums), John Vellis (guitar), George Karamolegos (vocals), Vangelis 'Chacholos' Filaitis (bass). Their second live performance in '84 at a cinema in Megara. The band broke up in 1986.

Απόγνωση's only release was in a 1985 Swedish compilation for the "Fetvadd" fanzine entitled "Whats Going On Inside My Head," with bands from thirteen countries. The "Despair" participated with three pieces. Thanasis Velissaropoulos, a friend of the band, recorded eight songs which were released on a split-cassette with "Deadlock."

After the band broke up, the Koulis and Vellis put together "Make Believe," Filaitis found in Thessaloniki and "Nausea" and after a while the "Out Of Control."

B5 to Β8: Rehearsal in unknown Studio with electronic drum kit, 1985.

All tracks were given for free by the bands to the compiler, and were never officially released in any other media.

Cassette comes in a standard box, with fold-out B&W cover. Only the bands' names appear on cover; no credits or tracklisting.

A few hundred copies made.