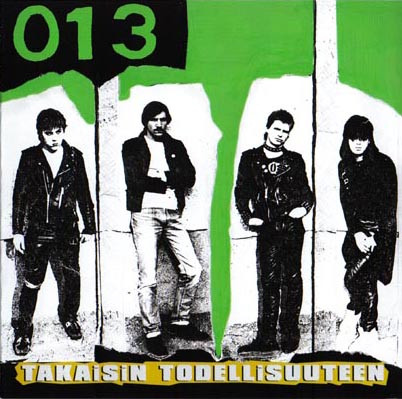 A punk band from Pukkila, Finland. 013 was founded in 1979 and their only album came out in 1983. The band was disbanded soon after that.

The original cover photos. Not any label outside of the package. Only manufacturer as text Kråklund Records added to original artworks.

LP Track B4 missing from the compilation.

The tracklisting on the CD has the really original titles, except the one "Petsamoon" is still missing:

Track 16 originally unreleased, from the same session as the "Russia Bombs Finland" tracks.

Track 18 originally unreleased, from the same session as the "Propaganda" EP track.

The copyright of this recording is owned by Propaganda Records and licensed to Kråklund Records Oy.