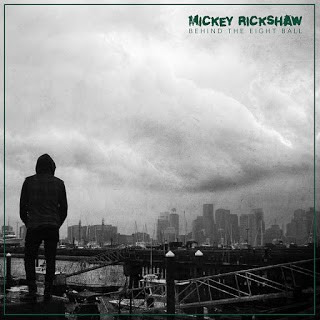 When I discovered Mickey Rickshaw last year on Bandcamp, I fell in love with them straightaway. Needless to say, their debut album “No Heaven for Heroes” made the Top 3 at my Best of 2015 list .

The lads of Boston have delivered a couple of videos to whet appetites and the new album “Behind the Eight Ball” is finally out. My opinion? A fecking brilliant album. Mickey Rickshaw offer in less than 30 minutes a gem of an album. The band fronted by Mike Rivkees have been able to deliver a real solid album. Are they different from other bands? Do they offer something new? Maybe not, but the point is that they have blended a lot of influences and sounds in such a way that the final result is unique. Accordion, fiddle, tin whistle, pipes, mandolin and or banjo can be heard all along the CD and every single instrument has its moment.

Mickey Rickshaw have decided to cover a couple of kick-ass songs and their renditions are amazing; “Destitution Road”, a song  written by Roaring Jack’s frontman Alistair Hullett and Dougie MacLean’s “The Gael”. The former is given a new lease of life, while the latter is arranged in a way that differs from Firkin and Lexington Field versions.

Regarding the self-penned songs, every Celtic punk fan can choose their own faves, as there is a bunch of badass numbers. “Rats in Allston” , “Grey Water”  and “One Life” will pleased everyone, together with “Monday Morning”, a song with an Aussie twist. “Albatross” is an interesting song, as it evolves from a Smokey Bastard/The Dreadnoughts infused number to a hardcore song. More hardcore elements can be found on “18 Minutes Down” and the fast-paced song “Ivy”. “Robbed in Mariscal” features ska punk vibes and Andalusian sounds. Finally, another side of the band is showcased on “Non Profit Warfare”, a Flatfoot 56 meet The Men They Couldn’t Hang song.

Yes, Mickey Rickshaw are the next big thing on the Celtic punk scene. They hail from Boston, and even if they are not a Dropkick Murphys wannabe band, I strongly recommend them to fans loving DKM, The Rumjacks, Bastards (on Parade) and Finnegan’s Hell.

Review by Kinksmarkham
Behind the Eight Ball by Mickey Rickshaw