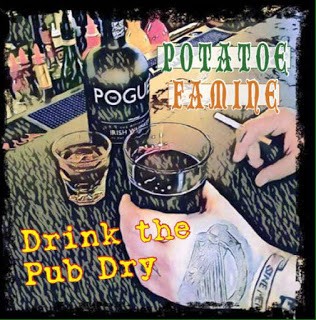 Potatoe Famine are a 4 piece band from Salem, Oregon. The band was formed by Devin Skelton and Chris Hooper. They wanted to play a St. Patrick’s Day gig and they picked up Richard Blanche. After that gig, they kept on playing and writing their own stuff. Devin and Richard decided to go electric. Then they hired Ben on bass and Chris left the band. Another guy called Chris moved up from California after leaving his band and he joined Potatoe Famine as drummer. When he joined the army, they enlisted their roadie Bobby as drummer . The current line-up is Devin Skelton (lead vocals, guitar, banjo. bodhrán and mandolin), Richard Blanche (fiddle, harmonica, vovals), Bobby Evanoff (drums, guitar, vocals) and Ricks Snowdon (fretless bass, vocals).

“Drink the Pub Dry” consists of 9 tracks, 5 self-penned songs, 3 standards (“Whiskey-Oh, Johnny-Oh”, “I Tell Me Ma” and “Wild Rover”) and a cover of Coot and Codger, “Hammer Down” (in fact a side project, as Coot and Codger are Devin Skelton and Richard Blanche). It’s the band’s third album following “Old Young & Pissed” (2008) and “Diversity Equals Equality”.  The CD was recorded by Stan at Vegetative State, Salem and has been released by Salem Ashtray Productions.

“Drink the Pub Dry” kicks off with “Whiskey-Oh, Johnny-Oh”. This shanty is sung by Devin a cappella backed by a bodhrán. After listening to this song, one would feel that “Drink the Pub Dry” a balladeer album, but this is not true: the following number, “Borrow a Dollar”, is a fast-paced Celtic punk song in The Skels vein.

Potatoe Famine cover “Wild Rover” on track 3. Once again, there is a balladeer feel that is not confirmed by track 4, “St.Paddy’s Day”. Taking into account that the band was formed for a St.Patrick’s Day gig, it’s normal that they have written a song about that day. This top-notch  mandolin and fiddle driven song could be filed together with Uncle Bard & The Dirty Bastards “Plastic Paddy’s Day”. Great lyrics and great work by Rick on fretless bass too.

The title track “Drink the Pub Dry” is also an amazing song. Imagine Larkin’s stuff with some drops of folkabilly.

“Jump Up Johnny” reminds me of Across the Border “Far Away”, even if the reason for Johnny’s running is different. Fast-paced anthem to drink and dance.

“Hammer Down” was written for the band’s side project, but it’s a full band cow-punk number. Fans of Cuttthroat Shamrock will appreciate this number.

To finish up, Potatoe Pirate deliver an a cappella  song about the luck of the Irish.

Potatoe Famine “Drink the Pub Dry” is a small treasure. Yes, it’s rough at the edges, but we love that, don’t we? Please, buy the physical CD instead of the digital version. It comes in a gatefold sleeve and includes the lyrics for some of the songs written by the band.  Enjoy!