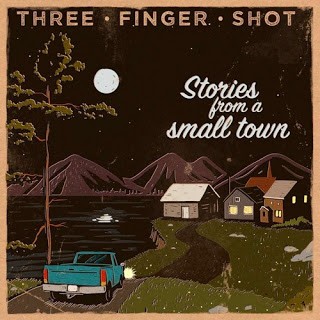 
Three Finger Shot are based in Calgary, but they are not from the Canadian prairies. Tony Ronalds (lead vocals) hails from Cape Breton and was the singer of Kilt, a band from Nova Scotia that released a couple of seminal albums in the late eighties, “Kilt” (1.997) and “Four in the Crib” (1.999). Trevor Bowering (rhythm guitar) is a Newfie from Kilbride and he met Tony in Ottawa after Kilt called it quits. Curiously, they met again some years later in Calgary, where both of them where living and working, and Three Finger Shot were born.

Their first work is a 6 track EP titled “Stories from a Small Town”. Three of the songs are country infused original numbers and the other three are a couple of traditional numbers and a cover of Kilt’s “Wrecker’s Den”.

“We never Said” is the single, an excellent number à la Great Big Sea with a country twist. Trevor sings lead vocals, Anders Drerup guests on pedal steel guitar and Anna Ludlow on fiddle. A folk version of this song can be heard at the band’s soundcloud page.

“Small Town Stories” features the same guests and is sung by Tony. It’s slower than “We Never Said” and the country influences are more obvious.

“Wrecker’s Den” original version opened Kilt’s self-titled debut album. Three Finger Shot has given the song a new lease of life. Tony and Trevor deliver a fantastic rendition joined by Anna Ludlow on fiddle and Tyler Kealey on accordion. Tony also plays tin whistle on a song that gets a Spirit of the West treatment.

Finally, there are two traditional numbers. The first one is track no.2, the medley “Little Beggarman/Saint Anne’s”. Tony sings lead vocals and Anna and Tyler back him perfectly on the folk instruments. Saint Anne’s reel is a little bit short, but

The closing track is an a cappella cover of “General Taylor”, a song that Great Big Sea fans will enjoy.

Three Finger Shot is the latest addition to a great bunch of East Coast/Maritimes folk-rock bands. If you love The Stanfields, Craic the Lens, The Fourth Well or Ruckus the Luxe, then check out 3 Finger Shot. 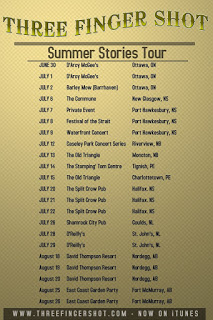 Some Fotos on Friday