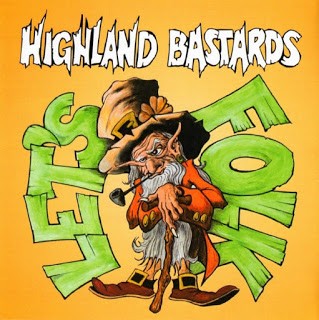 “Let’s Folk” is their first work, an EP released originally in August 2016. As usual, new bands focus on standards and covers of well-known bands such as Dropkick Murphys and Flogging Molly. Highland Bastards admit that a great deal of their set list consists of that stuff. However they also write their own material and 2 out of 5 tracks on the EP are self-penned songs.

“Let’s Go Murphys” lyrics are about a Dropkick Murphys concert at Budapest Park in 2014. The song kicks off with mandolin, fiddle and drums. The accordion backs the vocals, that sometimes reminds me slightly of Padddy and The Rats way of singing. There are two interesting instrumental passages, one featuring mandolin and fiddle and another one showcasing  accordion and bass.

“Kocsmabanda” is a song which is sung in their mother tongue. The lyrics are about the band’s philosophy of pub music. Good mandolin, Tin whistle and accordion tune.

The three standards on “Let’s Folk” are sung by a different vocalist. They are two Rebel songs and one Irish ballad. Dominic Behan’s “Black and Tans” is played with gusto. There are plenty of version of this song, but Highland Bastards have arranged the song in the right direction. IMHO, the mix could have been improved, as the bass is too strong and the fiddle and the accordion sound a little bit low. Obviously, this is their first contact with the studio and I guess that the quality of their next recordings will be better.

“Fuck the British Army” moves from a tin whistle and mandolin intro to a full band approach with electric instruments. The tin whistle, the fiddle and the rhythm section speed up at the end of the song.

To finish up, Highland Bastards deliver their own rendition of “Star of the County Down” showcasing accordion and a ska twist.

If we take into account the evolution of some of their neighbour bands (for instance The Crazy Rogues and The Scarlet), Highland Bastards can evolve into an appealing band. Their first step has been the right one: they are neither Firkin, nor Paddy and the Rats clones. The next step is clear: they should keep on writing their own stuff. I’m looking forward to hearing their sophomore release.