So-Cal punk and Ramonesque pop punk influences can be heard on some Celtic punk bands. For instance, Drink Hunters and Irish Moutarde (Bad Religion and NOFX) and Tortilla Flat and Kitchen Implosion (Ramones). But there were no bands blending successfully Celtic punk with younger pop-punk sounds so far. Quite a few tracks on the Drunken Dolly’s “Alcoholic Rhapsody” follow that path, catchy songs with harmony vocals and infectious chorus.

The band from Rotterdam has delivered a solid debut album. More than 44 minutes of music and 14 tracks that will please their fan base and will make more followers to jump in. There is a lot of pop punk on the album, but also So-Cal punk, straight banjo and mandolin driven Celtic punk and more.

Three songs from their previous EP have been re-recorded for the album: “Drunken Man’s Curse”, “Humongous Tattooed Arms” and “That Kiss”. As the “Drunken Dolly and the Drunken Man’s Curse” EP was reviewed here last year, I will not extend myself: those songs are Celtic punk classics.

Instead of stamping the Ramones 3 chords approach on their songs, Drunken Dolly have put some Blink 182 touches on them. “Endless Party”, “Time to Leave”, “Hold On”, “Alcoholic Rhapsody” and “Beware of the Fisherking” can be filed under that label. All of them are fast-paced songs with gang vocals, chorus to sing-along, manic mandolin and banjo picking and powerful guitar riffs.

Some Ramones echoes can be heard at the beginning of “Beware the Fisherking”, but similar sounds to Hoist the Colors or the early Lexington Field CDs can be noticed too. “Whatsherface” is a slower number that also reminds me of Lexington Field. “Sailor’s Song” starts off slowly, but soon it evolves into a kick-ass So-Cal punk number. Banjo and mandolin are excellent as usual. “Stop” has that Californian flavor too.

The brilliant single “No Regrets” and “Dear Friend” are European banjo led Celtic punk songs at its best. “Beat Up Good Johnny” is an old number (the original demo version can be found here). Flogging Molly’s spirit flies over this cut, an amazing song that also offers some ska-punk.

Drunken Dolly “Alcoholic Rhapsody” is a well-balanced album. There are different types of punk music and electric guitar mixed with banjo and mandolin. All of the songs are top-notch, but I’ve been really impressed by the pop punk songs. Ramones were the first band to bring the Beach Boys vocal harmonies to punk rock. The Queers brought that to a higher level. Now Drunken Dolly have taken that Beach Boys chorus and written some instant classics like “Endless Party” or “Time to Leave”. Hats-off boys. 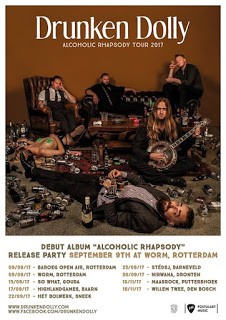