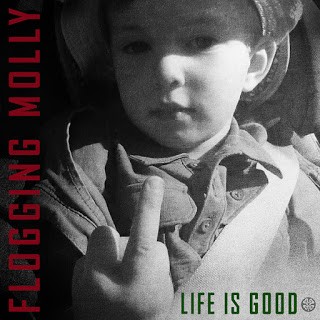 
Sometimes we, the fans, are vampires for our favourite artists. We love a couple of albums and then we don’t want them to evolve. So, if they try something new, we turn our backs on them: their blood doesn’t feed us anymore. Flogging Molly are one of the gods on the Celtic punk Olympus. “Alive behind the Green Door”, “Swagger” and “Drunken Lullabies” helped to establish the genre. The band extended the scope of their music with “Within a Mile from Home” and “Float”. But “Speed of Darkness” was a huge change and a lot of fans, me included, didn’t appreciate that album.

Some years have gone by and I’m not going to have a retrospective look on “Speed of Darkness”.

IMHO, Flogging Molly are  the best live band in the Celtic punk genre (sorry Murphys), and therefore their “studio” sins can be forgiven.

The band from LA chose to come back to Ireland to record their latest album. “Life is Good” was recorded at Grouse Lodge Studios in Co. Westmeath. These are the same studios at which “Float” was recorded. Apparently, Dave and the rest of the band wanted to recover the spirit of those sessions. I daresay that they succeeded, as “Life is Good” moves back from “Speed of Darkness” and the final balance is similar to that of “Float”.

As a fan loving the band’s early days, I’ve enjoyed particularly ”The Hand of John L. Sullivan”. This brilliant number is the closest song to the band’s Golden Age. But there are other kick ass songs. For instance “Welcome to Adamstown”, a song featuring Keith Douglas and Brad Magers from Mariachi El Bronx on trumpet. Or other cuts with a more mature sound. For instance, “Crushed (Hostile Nations)”. This number has a fantastic traditional sounding intro thanks to guest Neillidh Mulligan on uileann pipes, but the song evolves into something modern and really attractive. And “The Guns of Jericho”, where Dave does a great job on vocals.

Apart from those standout tracks, other numbers have a traditional/folkier feeling that makes them enjoyable songs. The arrangements and the performance are class on the opening number “There’s Nothing Left Part I”, on “Hope”, on “The Bride Wore Black” and on the closing track “Until We Meet Again”.

“Life is Good” won’t be maybe the album of the year, but it’s clearly a Top10 album and the comeback that all the fans were waiting for. 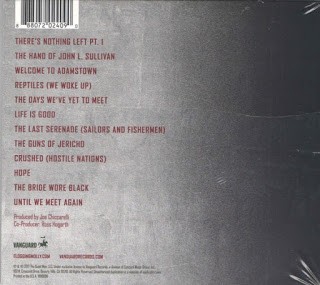 Beerbong preview new song off upcoming album "Future Behind Us"