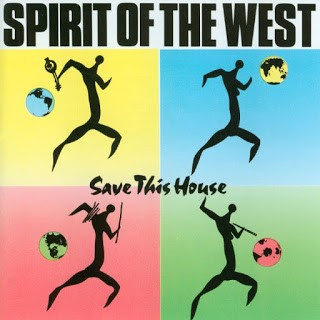 Spirit of Canada – Home for a Rest

(Source: Wikipedia) “Home for a Rest” is a song by Canadian folk rock band Spirit of the West, from their 1990 album Save This House. Although never officially released as a single, it is the band’s signature song and is considered a classic of Canadian music.

Written by John Mann and Geoffrey Kelly, the song tells of a drinking spree in London. The lyrics and the musical setting clearly revel in the fun of the experience, but also show a longing for the rest and comfort of home:

“ You’ll have to excuse me, I’m not at my best
I’ve been gone for a week, I’ve been drunk since I left
These so-called vacations will soon be my death
I’m so sick from the drink, I need home for a rest. ”

The song was written during one of the band’s first tours of England, and was originally more of a poem than a full-fledged song. According to producer Danny Greenspoon, the band considered it still a work in progress, and had not brought it to the primary recording sessions for the album; rather, it was brought to Greenspoon’s attention only as he was about to conclude work on the project and return home to Toronto. Recognizing the song’s potential, he immediately worked with the band to resolve their uncertainties about its readiness, and finally recorded it as the last song of the sessions.

British geographical references such as Euston Station, Charing Cross Road and Yorkshire appear in the lyrics. The later choruses switch the length of time that the narrator has been gone from a week to a month, and in some live performances change from a month to a year. The song’s musical arrangement incorporates the traditional reels “Castle Kelly“, “Glass of Beer” and “Swallow’s Tail“.

“Home for a Rest” was always the final song played at the band’s concert performances, excepting encores. A live performance of the song at the band’s 2015 Massey Hall concert forms the climax of the 2016 documentary film Spirit Unforgettable; due to Mann’s battle with early-onset Alzheimer’s disease, he struggles with the lyrics at first but the entire audience begins singing along.

The song was one of two Canadian songs (the other being “Do the Bearcat” by David Wilcox) to appear on the 1998 compilation album Frosh, alongside such party anthems as Iggy Pop’s “Lust for Life”, The Village People’s “YMCA”, Denis Leary’s “Asshole” and Beastie Boys’ “(You Gotta) Fight for Your Right (To Party!)”.

In 2005, “Home for a Rest” was named the 22nd greatest Canadian song of all time in a listener vote on the CBC Radio One series 50 Tracks: The Canadian Version.

The song is also frequently covered by other Canadian folk rock bands, including Mudmen and Enter the Haggis. Spirit of the West‘s original recording has also occasionally been misattributed to Great Big Sea on YouTube and in online lyrics databases. At a November 2017 fundraising benefit concert for Mann’s medical care at Vancouver’s Commodore Ballroom, the participants recorded a tribute version of the song onsite prior to the concert; participants included Jim Cuddy, Sarah McLachlan, Ed Robertson, Barney Bentall, Colin James, Shari Ulrich and Jim Byrnes.