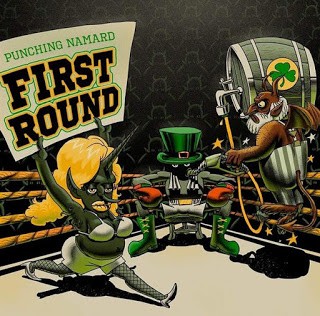 
Brazilian band Lugh opened the way for a couple of bands that have released excellent debut albums, RATS and Punching Namard. Punching Namard were our Band of the Month in January 2015. Their demos were reviewed here and we have been waiting eagerly for their debut album. The wait was worth it, since “First Round” is the sort of album that we  enjoy.

“Never Again“, the opening track features fiddle and banjo and has a bluegrass twist. One of my fave songs on the album. “No More Smoke” is another standout number. This time there is tin whistle instead of fiddle, and more banjo. The sound is perfect:  the tin whistle is not hidden in the mix and the chorus is addictive, let alone the lectric guitar passage.

A couple of tracks are sung in Brazilian Portuguese. “Relatos de un ex-Careta” is another highlight, a simple but effective punk song featuring fiddle and banjo. I love “Do Mar“, an a cappella shanty that is followed by “The Promised Land“, a song sung in English. This number is obviously the second part of “Do Mar” and fiddle and mandolin can be heard on this amazing song.

A video clip was shot for “Confession“, a powerful Celtic punk song with a So-Cal twist that can also be noticed on “As They Say“.

On “First Round” there are new versions of the songs from the demo. “Up and Down” blends powerful guitars with tin whistle and banjo. “Home” is a The Dreadnoughts infused number led by the accordion. “Find a Way” is an awesome number in the Flogging Molly vein with great fiddling. “It Was not What I Meant” is an upbeat song featuring tin whistle and gang vocals. And “Punching Namard“, the band’s calling card, gets a new lease of live.

The other songs on the album are “Dead or Alive” (an a cappella short song), “Beginning of the End” (jumping accordion, mandolin and aah chorus) and “Another Life” (a catchy number, but maybe not so energetic as previous songs)

The bands from Brazil, Argentina and Chile are fighting to find their place on the Celtic punk map. Punching Namard and other bands are proving that they can released albums as good as those issued by some of the best names on the Celtic punk scene. Give them a try.