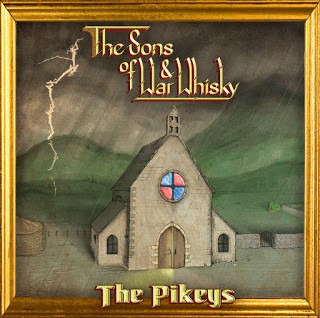 The Pikeys “The Sons of War & Whisky”
Release date: March 16, 2018
Running time: 33:17, 12 tracks
The Pikeys were formed in Sacramento in 2010 by Ben Mentze (lead vocals, lagerphone) and Mike Dalton (lead guitar, vocals). They have released some singles that were included in our Sampler Vol. VII from 2013 and can be downloaded from Reverbnation, two amazing videos (“Pissed Again” and “Banshee’s Torment“) and a live album (“Balls out Bootlegs“, 2017). “The Sons of War & Whisky” is their first studio album. Apart from Ben and Mike, the current line-up is Buji (banjo, vocals, artwork), Glenn Newport (bass, vocals) and Patrick Hennessy (drums). Former / part time members Trevor Miller (woodwinds) and Carl Ogren (mandolin, vocals) have also recorded “The Sons of War & Whisky“, together with guests Cameron Carbrey (piano), Sinjin Fraser (fiddle, from fellow band One Eyed Reilly), Matthew Holland (accordion), Noah Nelson (guitars), Jonah Mentze (trombone) and Keith Roberts (from the Young Dubliners).

“Drunk in Cardiff” is the perfect opener for this celtic punk album. Upbeat number showcasing tin whistle and electric guitar that remids me of Swedish band Finnegan’s Hell. The next track, “A.R.A.“, is a brilliant fast-paced song featuring banjo and tin whistle.

The first standard on “The Sons of War and Whisky” is “Botany Bay“. This time The Pikeys take a balladeer approach closer to The Dubliners or The Wolfe Tones, but with electric guitar.

Track no. 4 is titled “Last Guinness“. It’s an amazing parody of the Misfits‘ “Last Caress” with trombone and electric guitar. The Pikeys follow the drinking song path with “The Public House“. Keith Roberts from The Young Dubliners guests on this accordion driven number with a catchy chorus.

The Pikeys go mental on “Waxie’s Dargle“,  the second traditional song on the album. “Battle” is a standout track with great fiddle arrangements and an addictive chorus. “The Ballad of Sean Kellie” is another highlight: lively song to sing along, with woahs, electric guitar and a chorus that reminds me of SIR REG (even if The Pikeys sound harder than them).

“Sons of War”  is a slower ballad that proves that The Pikeys are comfortable on any territory. “The Briar & The Sword” starts with acoustic guitar but soon evolves into an interesting hard rock song . And “Requiem for Josh” is a poignant number where piano and fiddle take the relay.

The album is over with the band’s rendition of “Black & Tans“. Once again, The Pikeys move to the balladeer end.

The Pikeys have finally released their debut album almost 8 years after the band was formed. But the wait was worth it, since “The Sons of War & Whisky” is a brilliant album. Why should you buy the CD instead of the mp3 album? Because the artwork by Buji is rad and the digital version has only  11 tracks instead of 12. 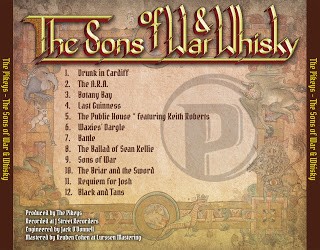