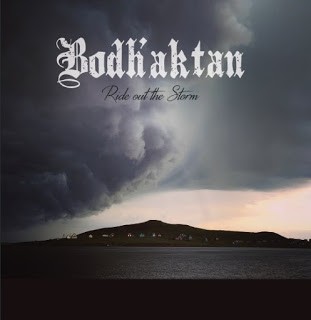 As usual, there are some traditional numbers and a set of tunes. The first trad song is the anthemic “Heave Away” and is based on Newfie band The Fables’ rendition (it can be found on their debut album “Tear the House Down” from 1998). The second trad song is “Black Velvet Band” and features The Chieftains legend Paddy Moloney on uileann pipes. Bodh’aktan cover differs from The Grinning Barretts’ rendition that can be found on the EP that was reviewed here. In 1998 The Chieftains released an album together with Canadian acts,  “Fire in the Kitchen”. Bodh’aktan didn’t exist yet, so you won’t find this song on that album. But if ever “Fire in the Kitchen” is re-issued, it would be wonderful that this number could be added as a bonus track. The last traditional song is “Mick MGuire”. This song shares the music with “Hot Asphalt” and Bodh’aktan have been inspired by The Irish Rovers version. The set of tunes is one of the highlights on the album. It’s titled “Reels” and there are three reels (the second one is “Julia Delaney’s” and the third one “St. Anne’s”).

“About Things to Come” is a kick-ass intro featuring excellent pipes and percussion.Bodh’aktan’s classic sound can be heard on “Nothing but a Game”, “Ride out the Storm” and “You are the Ones”. “The Bridge” is Rock’n’Reel at its best and “Get Loud”, an AC/DC infused cut, showcases the band’s hard rock edge too. On the contrary, “While I’m Away” is a quieter song with a folkier approach.

Two versions of the sing-along “We Cannot Fail” are delivered: the standard version and the bonus one, featuring German Celtic rock heroes Fiddler’s Green.

Fans of Celtic rock will enjoy “Ride out of the Storm”. The first two albums put the level too high, but Bodh’aktan have been able to keep on offering top-notch albums with different sounds and approaches.


NOFX full show at Punk In Drublic fest in Slovenia