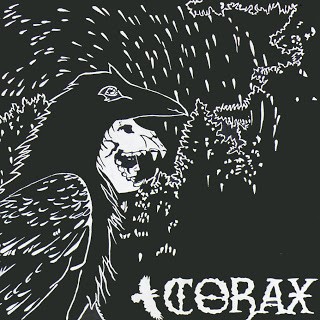 Corax are a Crust/Doom/Sludge Metal band from Johannesburg, South Africa
The members are:

Corax are an excellent Sludge/Doom Metal band featuring two dudes playing awesome Sludge Metal riffs.
I will let their bio do the talking:

“Corax was formed by Brent and Patrick, whilst under the influence of Faxe extra strong beer, on the 2nd of May 2010.  After 2 years of fuckin about in the garage we finally had enough material to record an album. We spent 18 hours in April 2012 recording our debut self-titled album at SABC studio’s in Johannesburg.  Corax will be playing shows full time from 2013.”

They have just released their stunning S/T debut album.
5 Tracks that runs for a loud and angry as fuck 30 minutes.

First track – Death Spiral – will show you what to expect from this hugely talented band. OK the album is a bit under-produced but this shouldn’t deter the excellent musicianship on show.
To tell you the truth the DIY vibe really adds to proceedings. It showcases how a band should sound on their first release. Loud, Angry, Raw and Passionate without any professional wizardry at all.
Corax are a band that is very raw indeed and it makes them a powerful force on the entire album. Death Growl Vocals coming at you like a machine gun with hard-hitting riffs in the background.
Tracks like Invoke Them, Timeless Gathering and Snow In The Shadows showcase this band is all about Primal Fury. Corax are angry from the very start. They will devour anything that gets in their way. This is one tough album to listen to. It’s bleak from the word go. Only listen to this if you are in a dark place as this album will fuck up your entire day. But what a ride it is.
I loved every mean minute of it. So if your feeling brave then headover to BandCamp and download this on Pay Anything You Want.
Highly Recommended.
Check This Great Band Below:

Corax full album is now up for download (for free) on bandcamp http://www.corax.bandcamp.com/