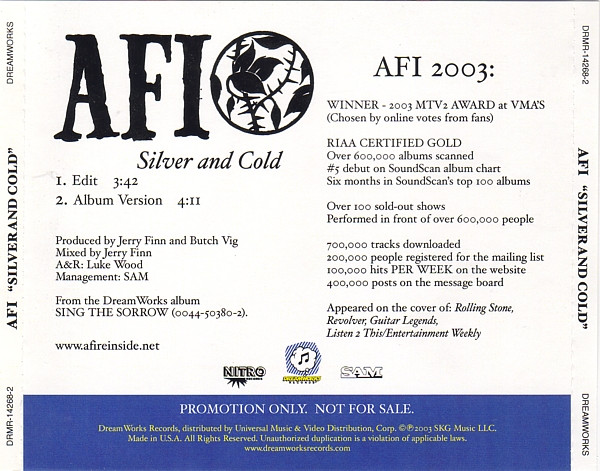 Short for "A Fire Inside". AFI is a hardcore / punk influenced rock band originally from Ukiah, California (Mendocino County), formed in 1991 while the band members were still in high school. The original band members included Davey Havok (Vocals), Markus Stopholese (Guitar), Vic Chalker (Bass), & Adam Carson (Drums). Vick was replaced a short time later by Geoff Kresge who later went on to play in Blanks 77.After releasing 2 EPs the band members split to go to different colleges. However after playing a reunion show on Christmas break the band decided to get back together and concentrate on their music. Eventually the band signed to Nitro Records releasing a number of releases throughout the late 90's. In 1997 Geoff Kresge left the band and was replaced by Hunter Burgan. Markus Stopholese also left the band and was replaced by Jade Puget (ex. Redemption 87).The band later signed to Dreamworks Records and released their major label debut in 2003.