ALVIN GIBBS & THE DISOBEDIENT SERVANTS – Your Disobedient Servant. (*A REVIEW*) 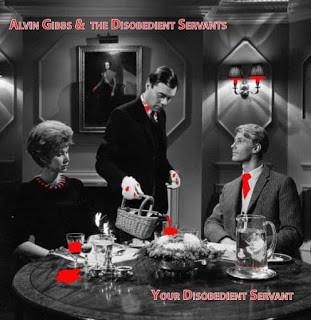 This review of Alvin Gibbs (UK Subs / Urban Dogs) long awaited solo album is its self long over due. The limited edition of 300 has sold out, but a CD digi pack is available from those good folk at Time and Matter Records. It’s a short, sharp, sweet and straight to the point blast of Rock’n’Roll. There are traces of Mott The Hoople, Iggy Pop and the UK Subs spread across the twelve tracks. Alvin’s unique and distinct vocals, interesting and intelligent lyrics offer both political and social comment along side personal tales from the Rock’n’Roll frontline. There are piercing guitar licks and ringing riffs strewn everywhere, and the pounding drums and thumping bass threaten to bring the house down. While the splash of spaced out and sublime psychedilia lifts the roof off. Alvin’s Dissobedient Servents are a Punk’n’Roll who’s who of musicians. Mick Rossi (Slaughter and The Dogs), Brian James (The Damned / Lords of the New Church), Jamie Oliver (UK Subs), James Stevenson (Chelsea), Leigh Hegerty (Ruts DC), Timo Kaltio (Hanoi Rocks/Cheap’n’Nasty), Mel Wesson (The Verve/UK Subs), Steve Crittall (The Godfathers), Barrington Francis (The Saints) all play their part, and between them they have produced an album that is beyond brilliant, the sound is greater than the sum of it’s ‘blood fueled guitars.’ A contender for album of the year?…yeah!….too right!!!!