I just learned that Anitia Silvers, one of my professors at SF State, passed away. Dr. Silvers sat on my MA thesis committee in the early 1990’s and was the instructor for “Postmodernism and Valuing,” one of the most memorable seminars I took as a graduate student at SFSU.

In later years, I would regularly see her at philosophy conferences. One on my fondest memories of Anita is from 2005 when I was attending an APA Conference in Portland, OR. I was walking down the street, looking for Powell’s Bookstore, and she came whizzing up to me out of the blue in her electric wheelchair. “Hi John! Are you lost?” she asked. When I told her that I was trying to find Powell’s, she said, “Follow me!” and zipped down the sidewalk, with me running full-speed behind her, leading me to my destination. 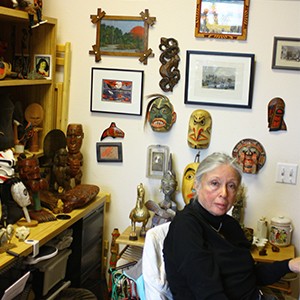 Here’s her obituary, from the Philosophy Department at SFSU:

Professor Anita Silvers died on the morning of March 14, 2019, of complications of pneumonia. Silvers was an institution in professional philosophy. She was Professor and former Chair of the Philosophy Department at San Francisco State University and a nationally recognized advocate for disability rights. Disabled by polio as a child, Silvers was a leading advocate for equality for persons with disabilities. On the faculty at SF State since 1967, Silvers worked to make access and disability services available on California college campuses. In 1980, she was appointed by President Jimmy Carter to serve on the National Council for the Humanities, the governing board of the National Endowment for the Humanities. She served for 26 years as Secretary-Treasurer of the American Philosophical Association (Pacific Division). Silvers received the inaugural California Faculty Association Human Rights Award in 1989 and served as a Senior Fulbright Scholar in New Zealand in 2005. In 2009 she was awarded the Quinn Prize for service to the profession by the APA, in 2013 the Lebowitz Prize for Philosophical Achievement and Contribution by Phi Beta Kappa and the APA, and in 2017 she received the Wang Family Excellence Award for extraordinary achievements in the California State University system. Silvers’s groundbreaking scholarship helped to establish disability rights as an important subfield of philosophy; she is regarded as an authority on medical ethics, bioethics, disability theory, social philosophy, aesthetics, and feminism. As a teacher and mentor she changed the lives of countless students, scholars, and activists. She will be deeply missed by her students, colleagues, and the many people she inspired.

A memorial will be announced at a later date.

She Came to Stay

The Nihilist @ Bound Together