If you went to school in the late 70s you would have had exercise books to keep your lessons in. In Trinity School they made a point of telling you to “back your book” meaning to cover the front and back with wall paper, or brown paper, or something to protect it from unwanted designs, writings, scribbles etc.

I found my old exercise books in the attic and either I was a very bad student (shock! horror!!) or I misunderstood their meaning. I “backed my book” with newspaper cuttings of punk groups, song titles, and slogans…also a lot of scribbles!

The 1st and 2nd Year books, prior to punk, showed I was scribbling the names of characters from the Japanese TV serial “The Water Margin” … Lin Chung, Hu Sang Yang… and a healthy dislike for mathematics with the slogan “Mathematics is a waste of time”then as a new school year began, so did a new type of graffiti…

I started this new art in the 3rd year at school, I estimate it to be 1978. I had often wondered when I started listening to Punk music and what had attracted me to it. I must have been in 1978, but sometime during the 2nd year at school. 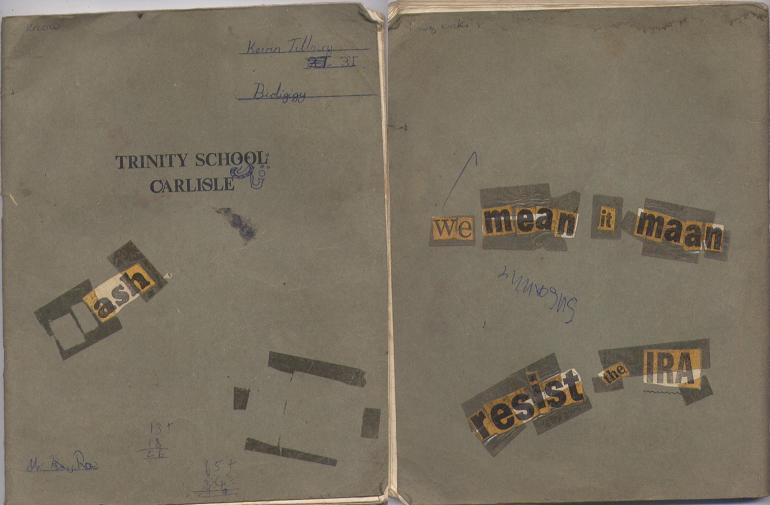 On my Biology book’s front and back cover I started to cut out from newspapers letters making up words such as “The Clash” or lyrics from The Sex Pistols, ‘God Save The Queen’ single “we mean it maan”, and my own take on the Northern Ireland problem! 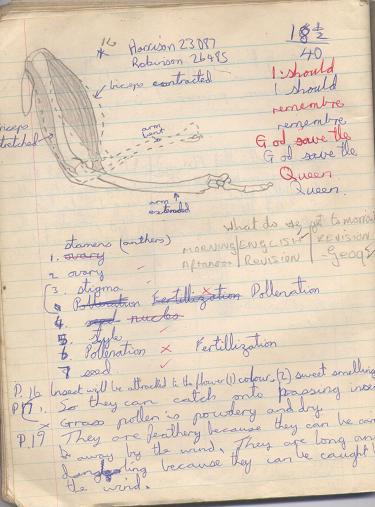 My Physics 3rd year book was no exception with newspaper cuttings highlighting the groups The Buzzcocks, The Stranglers, and my prospects after leaving school of “No Future” I doodled the Sex Pistols single “Something Else” on the back cover.

In the 4th year (1979) I continued to ‘back my books’ with similar art works. My Classical Studies exercise book had a more detailed composition with the group “Public Image Ltd.” blazoned on the front cover telling me that the band would be appearing on TV at 7 o’clock! On the back cover my religious experience grew to new heights with  iconic religious scribbles of “Anarchy, White Riot, Bob Marley and the Wailers, Sid Vicious” written out in the form of a cross, my hopes of “Anarchy in Trinity”, “Angelic Upstarts” and “I am an Anarchist, Anarchy in the UK”. A slogan from one of my own songs “Britain For All”, a Clash’s song “I’m So Bored with the USA”, at the time I was teaching myself Russian and I wrote in Russian the word “Pravda” which meant ‘truth’, as well as being the name of one of the CCCP’s newspapers, it was also the title to one of my own songs “Pravda”. In fainter hand writing a friend (a grebo) has written “Sid Vicious is a poof” 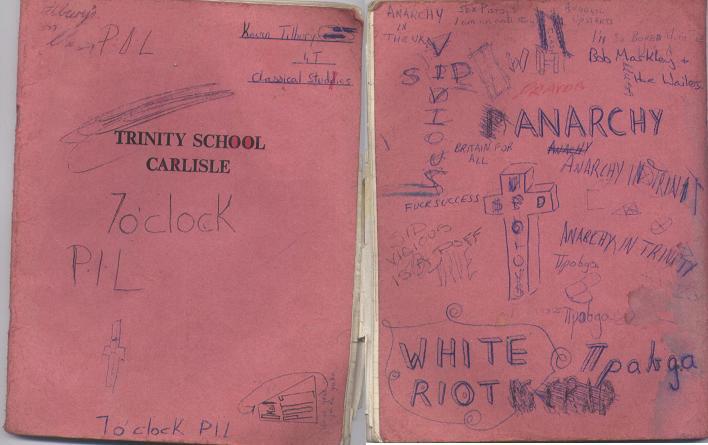 4th Year Maths was no exception, a TV told how USA programmes were flooding our airwaves and how the UK lyrics “I’m So Bored with the USA” was an alternative. I had doodled the skull and nuclear sign from The Clash’s song books, as well as my hope of “Anarchy in Trinity”! There is a “R.A.F” scribble which meant “Red Army Faction” a political group from Italy highlighted by The Clash’s/Joe Strummer’s T-shirt, and also the title to one of my own Songs “R.A.F.” (Rock Against Fascism). On the back cover there are the names of the members of The Clash, Sid Vicious on a tomb stone, with a friend writing next to it “bums Elvis Presley”. There are the members of The Sex Pistols, and also the names of the members of one of my early groups “Frenzy”:
Sparrow Trotsky – rhythm
Philip Bailey – bass
Jaws – lead singer
me? – drums (possibly written by the same friend, a guy called Kieth, or QE, who has been “denounced as a slag” in the right hand corner! 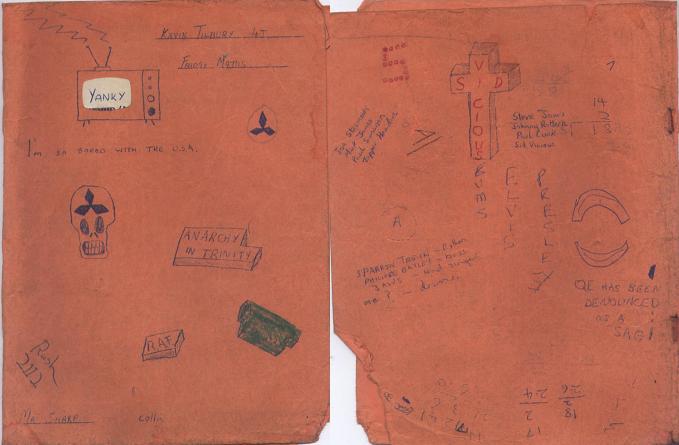 The final piece of art work was from another 4th year book, showing more Sex Pistols song titles “Problems” and “New York” and a cutting of [Public] Image [Ltd]. And as a loyal subject I finish with a portrait of the queen herself, looking regal as ever. 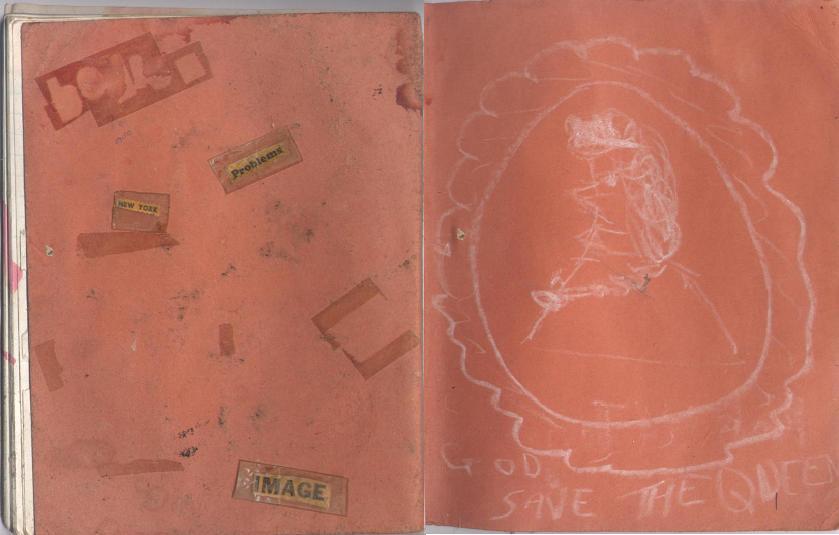 this blog entry will be added to the ‘Art Page’