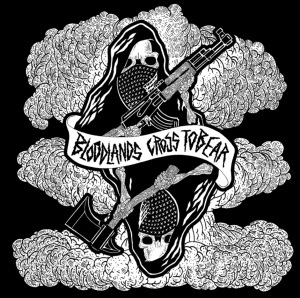 I’m lagging behind a lot, when it comes to great hardcore released in Finland in 2015, so here’s one of those records. Bloodlands is familiar to some of you from their full-length last year called Nihilistic Dimension, if not, you can read more of it here; Bloodlands – Nihilistic Dimension. They are one of those rare bands in our scene today to combine more of death and even black -metal influences into their metallic hardcore, that flirts heavily also with beatdown influences. This time Bloodlands, who are from Helsinki, have coupled together with Pori’s own real metalcore heroes, Cross To Bear. CTB might not ring a bell instantly, but be aware that this is a band that has had majority of it’s members in older finnish hardcore heavyweighs such as; Carpe Diem and Breamgod. Cross To Bear had bit of bad luck regarding their demo / untitled first release, as i understood they lost the original masters of this recording by computer glitch, so they couldn’t release it physically. This Split 7″ is the first official Cross To Bear release, they do fortunately have all songs available from that “lost demo” on their bandcamp. If you’re a fan of real proper metalcore like All Out War, Merauder or dig that mid-european vegan / edge metal like Congress or Arkangel, you should seriously take a notice. You should know to expect some skull crushing heaviness on both sides of this Split 7″, that is second release of Helsinki based punk / hardcore label Aggressive Sportwear Records (first being Paska Sakki 7″ EP).

Both bands on this split offer us two new songs and Bloodlands sets things off with Assault and you could say that the title tells all about this track here, it’s pretty straight forward with faster, even black metal influenced parts into riffing of chugging mosh, with vicious lyrics of violent assault (hence the title, get it?). Experience In Flesh continues into horror / gore-esque themes and starts another round of that death metal mosh, with some samples and nice instrumental parts to give aa break to the devastation. All in all Bloodlands have two solid tracks here, that continue the themes and style portrayed on their full-length. It’s going to be interesting to see and hear how this band comes out on their next releases, as they are already very metal -genres influenced, which direction they are going musicwise. Bloodlands are there on the board on both, metal and hardcore, so this could be recommended also to fans of Misery Index and Dying Fetus (who are obvious influences to their music).

Cross To Bear delivers us first into Mind Control, that offers nothing but pure metallic hardcore, in it’s finest form. These guys know what’s up, they know what they are doing and are doing it extremely well, Mind Control builds up crushing riffage walls, adding in some solos and harmonies. Vocalist Ville also delivers perfectly his trademark screaming and the song is all bound together into tight as nails playing. Worst Case Scenario is the second Cross To Bear track and it continues the barrage of heavy riffs and thick, solid beats that drive throughout the song, ending with brutal breakdown to offer you some serious mosh time. Cross To Bear is your answer in search of real metalcore, how it used to sound way before the whole word became more like a curse word. Below you can check out Experience In Flesh from Bloodlands off the split and Mind Control from Cross To Bear (plus their demo).

If you like what you hear and want to pick up this slab of wax, head over to:
Aggressive Sportswear Records