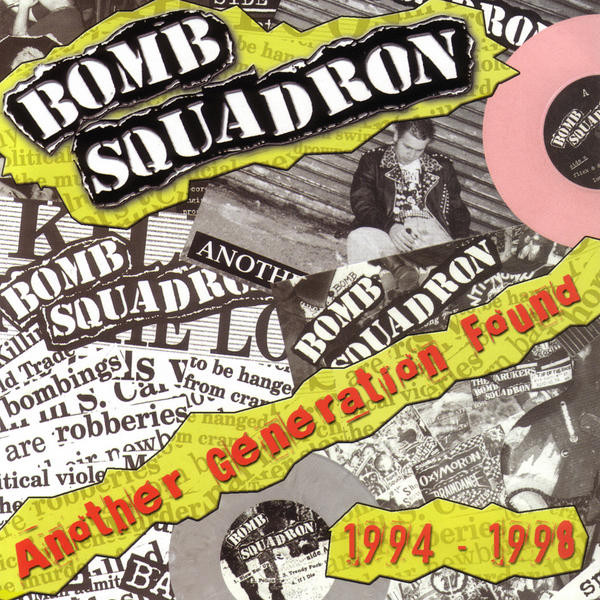 Mid-90s streetpunk band based out of Reading, PA in the United States. Released 3 EPs on 7", and a handful of compilation appearances before disbanding in 1998.

From the liner notes:
In 1994, five of the quirkiest people ever to form a band played their first show. It was a basement show in a small town 20 minutes north of the band's home in Reading PA, a poor city that died with the 70's. Over the next four years Bomb Squadron played some of the most entertaining, violent and sometimes sloppiest shows I have ever seen.
The first seven inch "Another Generation Lost" came out in 1995 to good reviews. The band started playing bigger cities and better shows. The line up at the time was Ian-vocals, Andy-guitar, Chris-guitar, Ben-bass, Jarrod-drums. I seem to remember them fighting a lot, but the shows were always lots of fun. In my opinion Ian was a great frontman and I had never seen a lead singer smoke cigarettes through an entire set until I saw him on stage. He came off like he didn't care about anything (still true), and that is a good thing for the right band, and Bomb Squadron was that band...
After a year or so of playing shows the band ran into problems. Ian's apathy started to clash with Andy's dedication to the band. It came to a head when Ian ditched their first show in Baltimore. A large argument ensued. Andy ended up needing to be restrained from violence, and went on to tell Ian "I know where you live motherfucker". Even though the seven inch was doing great and show offers were rolling in, the band fired Ian and started to look for a new singer.
This brings us to the Fat Dave. He was from Harrisburg PA, a town with as much going on as Reading (nothing). Dave had played in a few bands that Bomb Squadron had played with, and he impressed the band with his antics and presence on stage. After trying out a couple of other singers, the band went with Dave and began playing shows. This is when the band's shows started to resemble bar fights. Mix together Dave's habit of drunken self abuse and the band's popularity with the aggro skinhead set, a lot of the shows started to get out of hand. Three fights and a floor covered in broken forty bottles was a common occurence. When Bomb Squadron was on (slightly drunk) they were great, when they were off (really drunk) they were bad. There were shows where the band did not complete any song they played. One show I remember, Dave and Jarrod decided to drink all day and play an over 21 show that night. They could hardly walk by the time they played. Swinging a mic stand like a baseball bat, Dave destroyed a thousand dollar disco ball and a couple of monitors, Jarrod stopped a song half way through to go to the bathroom, and during the last song Ben stopped playing after the first chorus, put his bass in its case and walked off rolling his eyes. The police were called, Dave fled the scene, and actually beat the charges in court when the main witness against him showed up drunk. That in a nutshell was Bomb Squadron.
The band did a summer tour, put out two more seven inches, a bunch of comp tracks and in 1998 they broke up. This collection is their entire studio history. There were a lot of rumours about this band, none worth mentioning. The only thing Bomb Squadron wanted to do was play streetpunk, the way it should be, raw and fun.