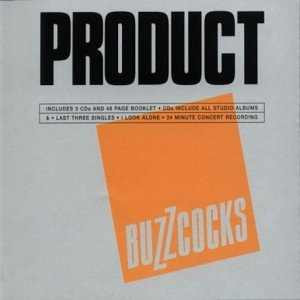 CD1 contains the 1978 LPs 'Another Music In A Different Kitchen' and 'Love Bites'.

CD2 contains the 1979 LP 'A Different Kind of Tension' as well as those singles from the 1979 compilation LP 'Singles Going Steady' that don't already appear on the above LPs.

Included is a 48 page booklet with a comprehensive history of Buzzcocks by Jon Savage as well as artwork and demo artwork for releases, concerts etc.

Nearly identical to Product but that has Made In UK printed on the CDs and matrices without 'NL' indicating that the discs were both mastered and pressed at EMI Swindon.