Album: Triumph Of The Ignoroids 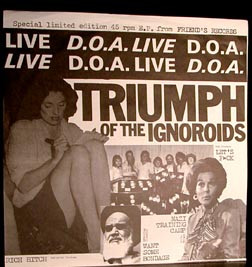 3rd pressing, 1000 made. Manufactured without the band's consent.

Three versions released.
First Pressing (1979, 1000 made), had an "uncensored" paper sleeve, with Marg's genitalia fully exposed. Some pressings had cardboard sleeves.
2nd Pressing (1980, 1000 made), had the "censored" sleeve, pressing in blue ink and a cardboard sleeve. This press omitted expletives and covered Marg's genitalia.
3rd pressing in a censored paper sleeve. Vinyl runouts contain an additional sequence. Side 2 vinyl label is blurry and has a handwritten "2", while the previous pressings have Joey Shithead sprawled out on label. Sound quality is much better on the previous pressings.

Recorded live on June 23rd, 1978 with a 4-track at the first Georgia Straight Battle Of The Bands.

Track times do not appear on the release.