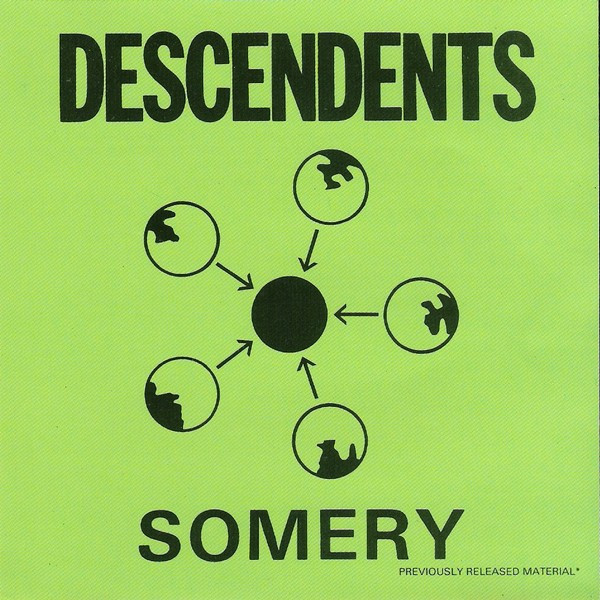 Descendents were formed in 1977 as an acoustic duo by Frank Navetta, and David Nolte. Bill Stevenson soon hooked up with the duo as their drummer. At the end of 1977, Nolte became bass player for the The Last and that group took precedent over David's commitment to the Descendents, so he was replaced by Tony Lombardo, although David stuck around briefly to sing with the band. Their first release (as a trio at the time with Navetta and Lombardo handling vocals) was the Ride The Wild / It's A Hectic World 7" in the style of melodic garage pop.
In 1980 they enlisted Milo Aukerman, Stevenson and Navetta's classmate and a constant presence at Descendents' rehearsals, as a singer, and reappeared as a 'proper' punk band, becoming a major player in the hardcore scene developing in Los Angeles at the time.
Their debut album the following year, descendents_somery.zip

Corrections: The insert incorrectly lists SST as the record company that originally released "Fat," "Milo Goes To College" and "I Don't Want To Grow Up" LP's. SST Records purchased New Alliance Records in 1986. This would also explain why the "Enjoy" LP was issued by both record companies that same year. This, perhaps, might also explain as to why SST chose not list New Alliance for the earlier LP releases since they where now issuing them under the SST label.