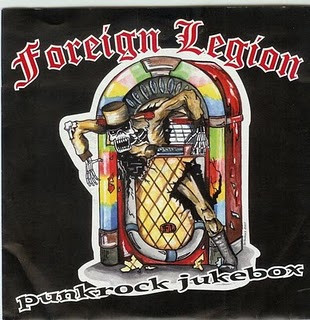 A punk rock/oi! band from Merthyr Tydfil, Wales. Formed in 1984.

1984–1991
Foreign Legion formed in 1984 from the ashes of a band called Society, later Dead On Arrival. Dead on Arrival had one song on 1984's Bullsheep Detector album. Following the name change to Foreign Legion (due partly to people shortening it to DOA, which could cause confusion with the Canadian band of that name) and a number of line up changes (drummers in particular) the band released their first EP in 1986, on their own Rent a Racket label with the line up of Marcus Howells on vocals, Lyn Murphy on guitar, Helen James on bass and Paul (Marshon) Marsh on drums.

Following further line up changes with Andrew Heggie on guitar and Steven Thomas on bass, the band released Surf City their second EP in 1989.
Their first full-length album entitled Welcome to Fort Zinderneuf was released later that year, by which time a new line up had evolved with Mark (Jolly) Williams joining on bass (from local band Blind Justice, who Andrew Heggie soon joined), together with Peter Giles on guitar and Ben Stansfield on drums, retaining only Marcus Howells on vocals.
During the 1980s the band played regular slots in the famous 100 Club and supported the likes of UK Subs, The Vibrators, The Partisans, Picture Frame Seduction, The Adicts, Major Accident, Toy Dolls, Angelic Upstarts, 999, Broken Bones and others in (...)