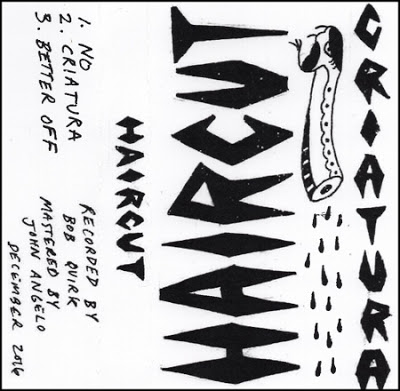 “Excellent debut from this new Charlottesville, VA group. Three tracks of furious, midpaced punk that really manages to stand out from the pack. I’m honestly having a bit of trouble naming any singular band or scene that Haircut draws direct influence from, which is a pretty damn tough feat these days! A couple of these folks played in Animal Planet, so if you were into AP’s left-of-centre HC punk approach, Haircut is definitely worth reaching for. However, I’ve really got to applaud the originality, strong production, and performance on this demo. These three tracks lay the foundation for a strong followup release yet have plenty of replay value of their own.”
Feeling some srsz Annihilation Time/Greg Ginn riffage in this one.