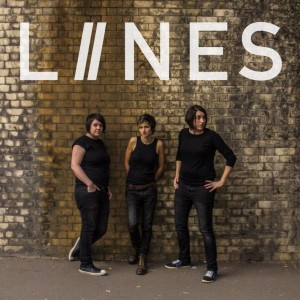 Not that they really need much of a leg-up from likes of LOUD HORIZON, but Manchester three-piece LIINES sent us notice of their latest video, to accompany the track, ‘Blackout.’

With Loud Horizon being on a bit of a hiatus for the past year or so, this band had escaped us. But thankfully, some of the more established names of the ‘new music’ scene have been more attentive.  With the likes of Louder Than War; BBC 6Music; Radio X and The Quietus all on their side, then you’d be daft not to consider the band a s likely contenders  for the various year-end polls (which seem to be produced earlier and earlier every year for some reason.)

So here it is – ‘Blackout’ – a gloriously dark, sub three-minute rampage through everything from old school punk to that indeterminate term, post punk. With vocals that seem to meld Poly Styrene with Andrea Zollo of Pretty Girls Make Graves, and a brooding bassline overlaid with a buzzing guitar, the formula’s just about perfect.

THEATRE ROYAL: ‘Standing In The Land.’