Album: Get Up And Die 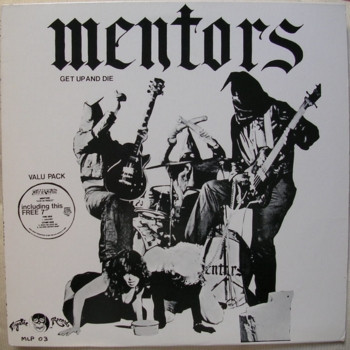 The Mentors were formed in Seattle in 1976 and during the 1980s were the most controversial and hated of metal bands. The “Parental Advisory” stickers that exist on records are in part thanks to these guys. The Mentors were the band who's lyrics were quoted most often (for shock value) by conservative Christian Senators who held hearings on the floor of the U.S. Congress in order to determine how to censor the music industry.

The Mentors infamously labeled their own music as "rape rock".

El Duce died under mysterious circumstances after being hit by a train in 1997 days after claiming he had been hired to kill Kurt Cobain.

This line up stayed intact for most of the band's lifetime prior to El Duce's death, except for periods in the 1980s when Dr. Heathen Scum was in school. The group has continued since El Duce's death. The current line up is: