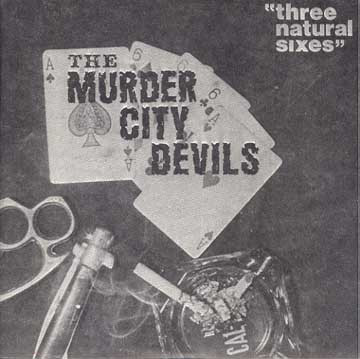 Unlike most punk acts of the '90s who travel along punk/pop and alternative ways of the rock genre, the Murder City Devils choose to stay in control of their riffs. Keeping a strong presence of simple features of pure rock & roll, the Devils finish up showing clean yet raw compositions, supposedly connecting them to the punk style. It was in Seattle (WA) in 1996 that vocalist Spencer Moody, guitarist Dann Gallucci, bassist Derek Fudesco, drummer Coady Willis, and Nate Manny (guitar, bass) ended up forming the Murder City Devils. Later, keyboardist Leslie Hardy joined. The Devils broke up in 2001 with an incendiary farewell to their hometown crowd on Halloween night. They have since performed 4 reunion shows; two in Seattle in 2006 and two in Austin in 2007. In late 2009 the entire original lineup reformed for a series of West Coast shows which carried into a series of East Coast shows in 2010.

label says 45rpm but cut at 33 1/3. Released on black (this one), pink (transparent+opaque) and red vinyl