As I was starting to research for this blog I came across info about the “Chevettes”, the “Sconeheads”, “Aftermath” and the “Renwick Bats;. Great names all of them. But what did they sound like? I could find very little info online, and I did not remember enough to write anything from experience.

The other day I got a surprise mail from Mike Hodgson from Penrith, that went something like this:
“Hi, I just read your message about the punk in Carlisle blog. I was in many of the early Penrith based bands (Chevettes, First Offenders, Too Much Too Soon etc and played a few gigs in Carlisle with bands like the Ironing Boards the Limps and so on. Ok, most of my memories are clouded by booze and weed but it was still an amazing time. I also have quite a few early recordings from most of the early Penrith bands if they’re any use?” For me, Xmas had come soon…
Mike wrote a bio…giving some background info and some photos to go with the mp3 recordings.

For those who don’t know where Penrith is located, it is about 20 miles south of Carlisle, it was/is a market town surrounded by farms, hills of the Pennines and the Lake District, although it has grown over the years it still retains its “village” characteristics. I used to go there to practice with “The Red Aligatorz” in the early days (Ellie came from Penrith) and I played a punk festival there with my band “Frenzy” in 1982, and Pete Mitchel answered an advertisement that Dung and I stuck up in the Pink Panther Record shop while looking for a bass player (you can read more in the Frenzy page).

Being a small town it has its own advantages and disadvantages. One of its advantages (for me) is the humour that comes from the people (the same can be said for the West Cumbrians) and this can be seen in the songs that Mike has donated to this blog. It is a great insight of the bands from the late 70s until the 80s from a town that was even more cut-off than Carlisle was when it came to visiting bands, it really was a “D.I.Y. Punk”, and a small community; as Mike said in one of his mails regarding the bio…”I’ll do a brief timeline sort of thing this weekend. I tried to do a family tree years ago but the scene was so incestuous it got ridiculous.”

My thanks go to Mike for this contribution… the rest is in Mike’s words:

1976: The ‘Honour’ of being first goes to either ‘The Remains’ a School based covers band who may or may not have gigged or to an unamed 3 piece (Gordon Sisson, Paul Allan and Derek Ealand) who did at least 2 gigs.

1977: In my view the first true punkband was the Renwick Bats (Original line up: Gordon Sisson, Pete Mitchell, Mike Snaith and Barry McNeil) They played what is generally considered to be the towns first true punk gig at St Andrews Parish rooms. Over the following few years the line up changed totally many times!

The Crabs, Hmmm not 100% on this but I think they were one of those bands that existed but didn’t actually do much. 1978/79: The Chevettes and the Bats both split around the same time and the First Offenders, Pete Mitchell, Mike Hodgson, Barry McNeil and Gary Waugh arose from the wreckage.

There were also a few short-lived bands such as The Wall (Robin Ion, Chris Green, David Bracken Stephen Pattinson (I think) and the legendary Bored Planx (David Warwick, Steve Baglee and 2 others whose name s escape me)

Gordon Sisson reappeared with, firstly ‘Radios Appear” (Gordon Sisson, Craig Lewthwaite and one other) Followed closely by ‘The Sconeheads (Gordon Sisson, David Bracken, Steve Carruthers and Barry McNeil) and were the only local band to release a 7″ single the awesome ‘Sconeheads go Buckskin’ EP

As for venues there were very few. St Andrews Parish rooms being used several times (Including for the Anti Royal Wedding gig) Other places were various church youth clubs and the council run Youth centre (Where the UK subs played!) There were hardly any Pub gigs as most of the players were under 18 a the time although The Tudor did host a few in 79.

Am I still playing? Nah, I’ve ‘retired’ The gigs I did with the reformed ‘thee Overdose’ were (Probably) the last I’ll play… wanna buy A Gibson SG and a Marshall amp? lol”

Here is the recordings Mike sent, a great mix of material that gives an overview of bands in Penrith:

Some photos of the Chevettes

Some photos of the First Offenders 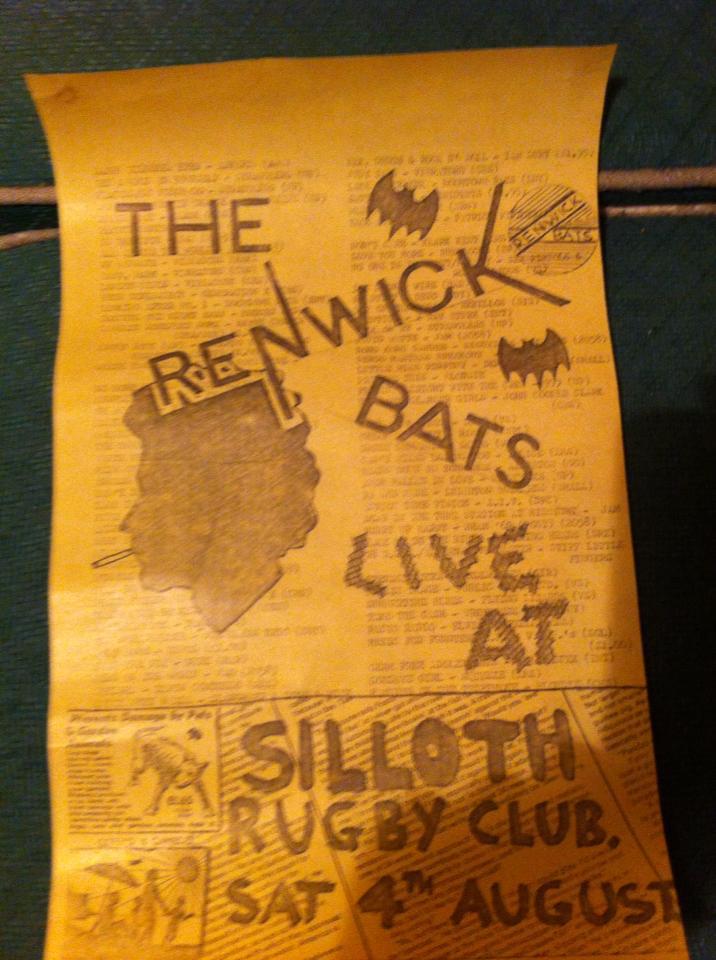 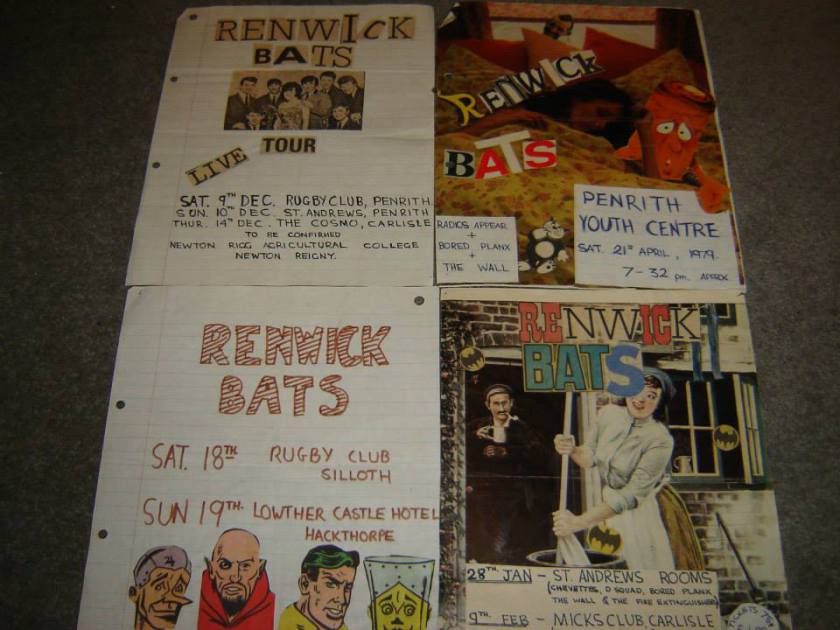 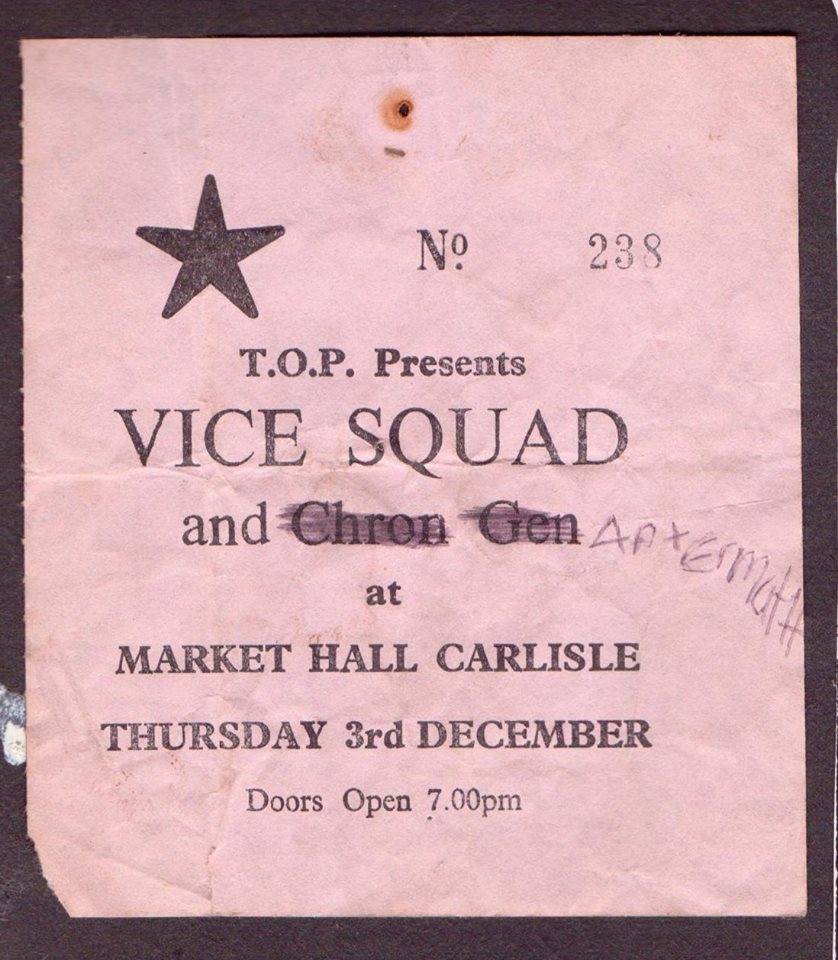 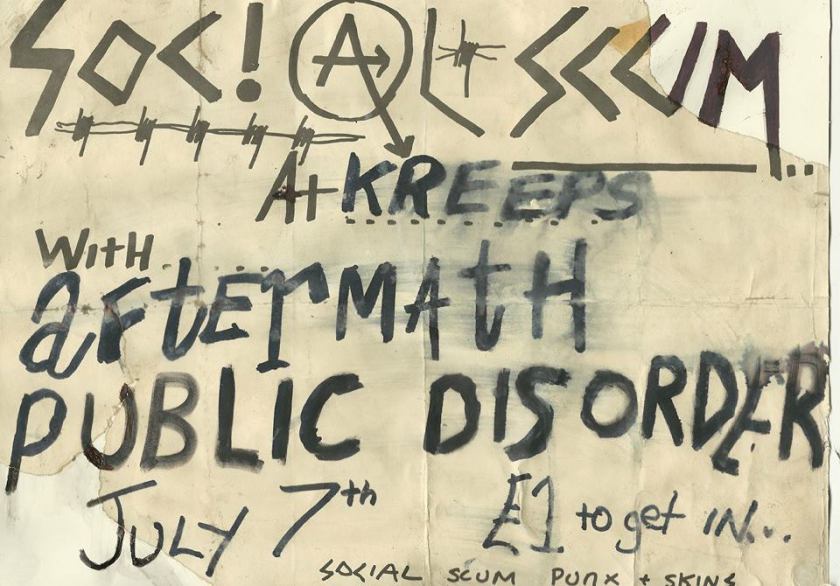 The Wall
Some photos

A mention on the web of 2 Penrith bands, but very little information. Click on the link for the source:
“Cumbria
Crabs (Penrith, 77); Renwick Bats (Penrith)”

“No Thrills” in concert