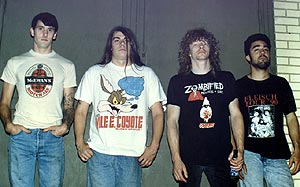 Repulsion are one of the most noteworthy grindcore bands to have ever existed, partially because they were crucial in its formation. They were formed in 1984 in Flint, Michigan, and led a brief four-year existence before breaking up in 1988, reforming again in 1990, and then breaking up in 1993 (though have been active again since 2003). Out of their initial four-year timeframe comes a handful of demos, and one very important record: Horrified.

Though released in 1989, it was recorded in 1986, and is often heralded as being the first “grindcore” album ever. Keep in mind these recordings pre-date Napalm Death’s Scum by a year. In a very bastardized description, grindcore came together as a natural fusion of hardcore punk and thrash metal. The result is the blast-beat pounding, chainsaw guitar revving, minute-long song sound and formula we know today. This album is widely regarded as being immensely influential, and still holds up today as an incredible album. The band’s contributions to the history and development of genres like grindcore and death metal are undoubted, and that is all thanks to this fantastic chunk of brutality here. Enjoy. 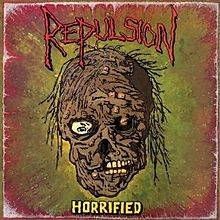 
10 Bands Who Changed Their Name and Found Fame