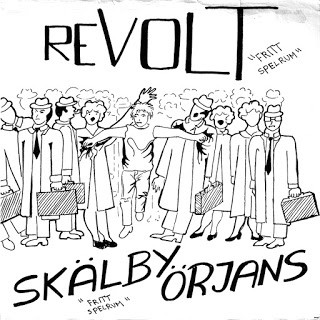 Two Järfälla-based bands with three songs each and both play excellent ’77 punk and this record was released in an over sized foldout sleeve with all lyrics printed on it and all in good D.I.Y. manner. Both bands toured a lot in Sweden together and the result were these six sound orgasms. Skälby Örjans with their only vinyl songs, Revolt went on releasing a great mini-LP called Vår Blotta Existens (as bonus with it) in 1982 which goes more into rock but they have not lost their punky roots and they also featured on the Förortsrock – Musik Fran Järfä compilation which was released in 1983, of course via Järfälla Rock Records. In any case one more rare + beautiful record and I know you would like both. And now I have to move in bed.
– Special Thx to Fredrik –
here