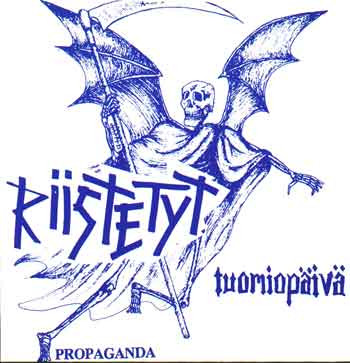 A punk/hardcore band from Tampere, Finland, founded in 1981. The band was originally called Cadgers and recorded one split 7" before changing name to Riistetyt.

Four mid and high tempo tracks from original Tuomiopäivä -master. The couple of missing ones released later. Originally recorded in autumn 1983 for 12" Propaganda Records-release.
This is 3rd re-issue with blue cover. (Really manufactured later 1993 by Kaaos Korporaatio. Only a few copies printed.) Very much darker blue cover than the earlier one.
Original issue on red and black vinyl and with green cover.