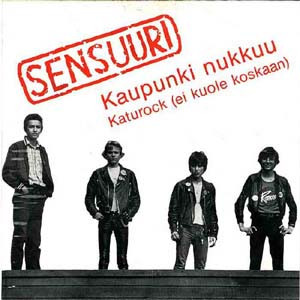 Finnish punks Sensuuri ("Censorship"), influenced by Ramones and Buzzcocks, released their first single in 1979 when the guys were only 15-16 years old. The a-side of Kirjoitan Seinään ("I Write On The Wall") was an instant hit with it's angsty lyrics and is now considered one of the classic tracks of Finnish punk. A hastily made debut album was released later on same year for mixed reviews and then a couple of 7 inchers more, but nothing like the first single emerged and Sensuuri's career was over after only a year. Drummer Pasi Pakarinen joined later the Ramones style group Pojat and guitarist/songwriter Costello Hautamäki became a notable person in finnish rockscene, most known for his membership in "The Rolling Stones of Finland", Popeda.