Label: Not On Label (Slapstick Self-released) 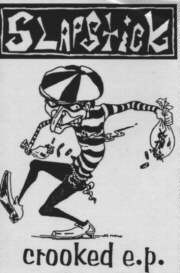 Slapstick is a punk-ska fusion band from the Chicago area that was primarily active from 1993 to 1996. Started by a group of friends from the Elgin area, the group took inspiration from Operation Ivy and the guttural punk vocals of Crimpshrine. Since disbanding in 1996 Slapstick has periodically reunited to perform shows for various reasons, including benefits and anniversaries. The band is known for being the root of the "Slapstick Family Tree", a group of musical projects which spawned from members of Slapstick, including Alkaline Trio, The Lawrence Arms, The Broadways, Tuesday, Duvall, Colossal, The Honor System and The Falcon.

This tape includes the Crooked EP plus five unreleased songs.