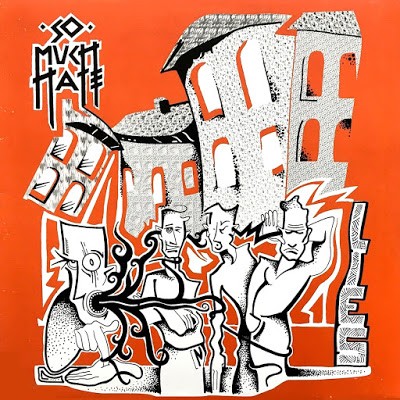 The fifth and last album by this four piece Hardcores from Oslo, active 1986-1996, on X-Mist Records/Progress Records. So Much Hate consisted of members of Svart Framtid, Kafka Process and Bannlyst. The band was one of the hardest Norwegian hardcore bands in the 80’s and 90’s. They played over 400 concerts in Norway and abroad. So Much Hate was strongly linked to the Blitz House and the plates, and especially their lyrics appear to be time-sculptures from Blitz’s history. So Much Hate was more uncompromising and hard-hitting than any other Norwegian band from their time and were one of the leading underground bands in Europe. They were on tour including with Ignition and played more concerts together with greats such as Fugazi, Indigesti and Kina. After a farewell tour in Europe in fall 1996, they played their last concert at Blitz on November 14, 1996. Vocalist Gunnar (vocals) moved shortly to Germany and settled there, Løvik (guitars) joined the band Captain Not Responsible, while Per (bass) and Finn (drums) joined Drunk. Løvik died in March 2007. If you like the album I recommend their third Blind Alley (listen).