Social Scum, in my mind, was a rival to D.O.S. I am not sure if that it is fair to say that now, but in those days it seemed to be so. I do not think I heard them play, although they shared the same rehearsal space as ‘Societies Victims’ in the basement of The Wheel. We never met, it seemed we kept out of each others way!

The fan base was divided, with a following for either Social Scum or for DOS. A lot of it passed me by, but you would hear stories of this or that gig ending in fights.

I can’t find any recordings or photos, but it is fair to say that Social Scum was a fixture of the Carlisle punk scene. Not sure of the songs they sang either?

When Societies Victims’s equipment went ‘missing’ Social Scum was blamed. But it is nice to know years later that it was not them and the gossip was false:

Peter Ostell writes: “I was in the band “Social Scum” in 81/82 (Ozzy-drums) along with (Kenyon-base) & the late (Anthony Styles-aka-Gene) also Wigy for a bit. Practiced in the cellar of the Wheel. Managed to play a few gigs…Star & Stripes, The Wheel, Denton Holme & Annan (always seemed to end up in a scrap or the toilets being smashed up, so always ended up paying for some repair!!). Ended up getting our Amps & Mics stolen from the Wheel practice room, soon after that Gene left & the band eventually folded!!”

Jimmy Johnston kindly sent a ticket from one of Social Scum’s gigs. 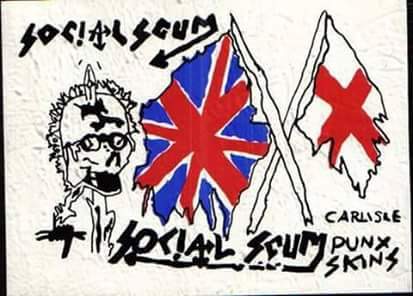 I would value people input on this band as not much is known about them.

Within the Walls (Sunday)

Within the Walls (Saturday)