Track by Track is a recurring new music feature in which an artist offers a comprehensive rundown of their new album.

Gizmodrome completely own the designation “supergroup”: The band comprises Stewart Copeland (The Police), Mark King (Level 42), Adrian Belew (ex-King Crimson, David Bowie, Frank Zappa), and Italian singer/multi-instrumentalist Vittorio Cosma. Their self-titled debut is out this Friday, September 15th via earMUSIC and it proves that these are the type of artist who really know what it means to be super.

Unlike most projects featuring this much talent, the musicians were actually able to get together and record in the same room. They met up in a recording studio in Milan, Italy with producer Claudio Dentes and spent 15 days creating music that Copeland himself calls “vibrant, electric, and unpredictable.”

It’s a progressive pop sound that hinges on new wave quirks and wild musicianship from King’s speedy bass to Cosma’s creative keys and Belew’s dexterous, ripping guitar lines. Copeland himself provides more than just his legendary drum skills, stepping up to provide lead vocals for most of the tracks with his speech-sing delivery like some sort of prog-punk Craig Finn-meets-Michael Stipe wonder. It all comes together for an album that rattles and grooves with the palpable joy of geniuses at work.

Ahead of the official release of Gizmodrome, the entire 12-track effort is streaming below.

For more insight into the songs of Gizmodrome, Copeland and Belew have provided Consequence of Sound with an exclusive Track by Track breakdown of the entire record. Read on to learn what other instruments Copeland played on the album, which song has a Star Wars connection, and which one was built off a drum loop written for Foo Fighters’ Taylor Hawkins.

“Zombies in the Mall”:
Adrian Belew: I love the way this kicks off the record! Just the kind of music I want to start my day. First, that horn section (I didn’t even know we HAD a horn section) puts me in high gear. Then I am immediately engaged with this larger-than-life singer and what a fabulous groove. No wonder it was so much fun to go wild on guitar!

Stewart Copeland: I AM THE HORN SECTION, MY TROMBONE!

This was an early Gizmodrome track with a different lyric, and then it changed in the studio to a lyric about zombies. So we went with that!

“Stay Ready”:
AB: This is the first track I remember overdubbing guitar to. In the control room someone said, “Wouldn’t it be nice if I could start before the track?” So I did and it fit perfectly. That’s Gizmodrome! To me this song fully epitomizes what I love about the band. A fun quirky song performed perfectly by a band of joyful professionals who obviously love what they’re doing.

SC: : When Adrian says overdubbed, he means he is overdubbing to what he and us had already recorded together! Like all the Gizmodrome tracks, we played this stuff in a room looking at each other. This song was originally commissioned for a Star Wars spin off called Droids.

“Man in the Mountain”:
AB: Stewart’s voice: Not for everyone? That’s a shame! I find it to be a huge part of the charm this record exudes. Back home in my own studio I tried to do a vocal to replace Stewart’s and quickly learned how important his personality and delivery is. I love it. For me there is so much to like about this song it feels like each player has immediately found his way to shine. And mark’s “giddy up vocals” say it all.

SC: It could be that we are the men on the mountain, coming down to get chewed up by the world ONE MORE TIME!!

“Summer’s Coming”:
AB: Unexpected in the midst of the pool of testosterone, this song proves to me that Gizmodrome can go wherever we please. It bodes well for our future, from the opening notes I feel transported. To summertime: cool breezes. The beach. Once again Stewart’s storytelling is working its charm and just then Mark and I join in with our Beach Boy chorus: Now THAT is heavenly! Listening to the record at about this point I’m thinking of something Mark King often says: “Man, I LOVE this band.”

SC: I love this band too. And when we have a week off on tour, we are probably going to get into way too much trouble.

“Sweet Angels”:
AB: What a cool and unusual groove and it keeps shifting from one section to another. Around the time of recording this song we had realized a vocal blueprint which worked for us: Stewart sings the story (verses) and Mark and I sing the choruses. I love singing with Mark. Our voices were made for each other. What a lovely bass solo too! Mark King rules the world. and Vittorio’s magic touch at the end — so nice.

SC: This is a rare Gizmodrome track that was actually was overdubbed onto a drum loop that I had already created for Taylor Hawkins. He was collecting drum solos for his album and I didn’t hear that part about how he only wanted 16 bars. So I built this three-minute grove on timpani, gong drum, traps drums and every darn thing I can hit in my studio. Taylor used 16 bars, Gizmodrome used the rest. The lyrics were co-written with Pat McDonald.

“Amaka Pipa”:
AB: An immediate favorite of mine. I have never heard another song like it. The wild blend of Stewart’s drums and bullhorn ranting vocals made me reach for the radical “foxxtone” guitar sound and happily cut loose! Stunning keyboard work glues this together and helps propel this one-of-a-kind sound — the sound of Gizmodrome.

SC: Something you never hear in Gizmodrome is, “We’ve got to think out of the box.” Our problem usually is, “Where is the fucking box?” And just when we think we found it, Mr. Belew blows up the box. So he did on this track where he came in out of know where with that guitar riff that changed everything. The lyric actually is in English… of a kind. Kind of a polyglot of all the dialects in America. “Amaka Pipa” is obvious “American People.”

“Strange Things Happen”:
AB: This makes me smile my biggest smile. So much fun to play and sing. One of the earliest tracks we tackled, probably around day three of our session, this one convinced me to join the band, that’s how much I like it. I love the combination of sounds that change between myself and Vittorio throughout and I had a blast adding little touches. A great song to sing along with.

SC: It’s also one of the oldest songs in my Cookie jar. I’m not sure what was going on when I wrote it, but strange things have been happening for years now — decades!

“Ride Your Life”:
AB: This song came after our first session was over and we realized to make our best effort we weren’t quite done. So the boys went at it again without me (I was touring) and thankfully left me room to rip out some guitar stuff. The song was based (pun intended) on a heavy-handed riff from Mark and grew from there. I love the weight of this especially when it is offset by the beautiful acoustic piano parts. I can’t wait to play this live.

SC: My favorite lyric on the album is: “We are sinners all/ And can’t help but judge/ So when the gavel falls/ (ROLLS A BIG RRRRR) Rrrrrremember LOVE!”

“Zubatta Chieve”:
AB: This is another welcome departure. Such a richness of sounds and the vocals are especially unique. Sonically speaking, Gizmodrome seems to live in some kind of musical jungle where anything goes. I’m not sure which continent this comes from, but I want to go there. I love this production from master Claudio Dentes. How we are going to sing this live, I have no idea, but I’m sure we will.

SB: It is a celebration of a language that I don’t speak very well, Italian. It’s such a beautiful musical language and when you work in Italy surround by Italians, you’re surrounded by the music of their language. And you don’t need to understand the words to get the feeling, the passion, the romance of Italy. So I wrote this song in Italian without the faintest idea what it means. Since then my Italian has improved.

“Spin This”:
AB: Ah, at last the “gazillion dollar thumb” makes an appearance! This is a political novel put to music. Once again, as the guitarist of the unit, this was so much fun to rave over. More great vocals from Mark and Stewart. This will be a blast to play around the world. I think we can spin this!

SC: This lyric goes way back to the ’80s when I was the subject of tabloid interest. The bizarre stories that would be concocted on the slimmest evidence amazed me and in hindsight, a sense of humor kicks in and if I’d only known it at the time I could’ve spun a lot more of this.

“I Know Too Much”:
AB: Another awesome piano interpretation leads us into one of the earliest pieces we recorded. To my ears I could hear this on a radio anytime. A very friendly song, I loved singing harmony with both Stewart in the verses and Mark in the choruses. A new wrinkle. And what other band would let their guitarist go wild for so long and then turn him up?!

SC: Gizmodrome is all about delving into the deepest weirdness of Mr. Belew. And when we find it of course we’ll turn him up. It’s also where Adrian and I discovered our twisted Everly Brothers duet. We will be doing more of this on the next album.

“Stark Naked”:
AB: Our one instrumental (unless you count our EP Riff Tricks Vol. 1, which I certainly do). Does this remind anyone else of the cop shows of the ’70s? If so, that was intentional. A glorious way to go out by throwing in the whole kitchen sink. And there you have it, the beginnings of something fresh and hopeful.

SC: We sure did throw a lot of good stuff at this track every time somebody did something it would inspire 10 more ideas. The big issue was how to trim it all back so that it was one thing.

Pre-orders for Gizmodrome are available on iTunes and Amazon. 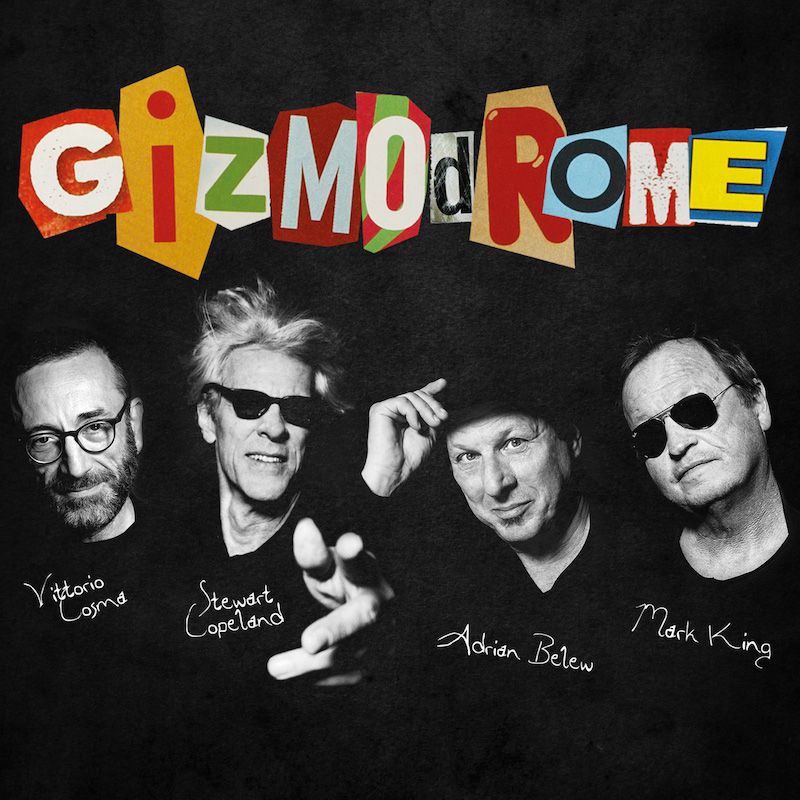 The Replacements share live version of “I’m in Trouble” from For Sale: Live at Maxwell’s 1986: Stream