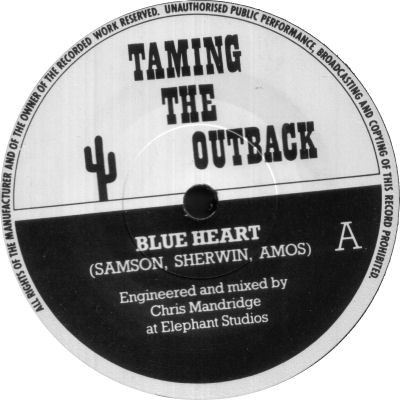 Taming The Outback were a three-piece from Southend-on-Sea (Essex, UK) and were ...

The band were active from 1986 to 1989. While they spent most of their time playing outside of the town itself, they were very much a Southend band and established a large and loyal following all across the UK. The original three members formed after criss-crossing each other’s musical paths in South East Essex in the early 1980s. Melbourne-born drummer Daryl Amos and bass player Jason Sherwin first played together in local band A Wreath For Brezhnev, later meeting-up with guitarist/singer Tony Sampson, who was then playing in the band Playground, to form Taming The Outback – a band characterized by an aggressive, driven, rhythm section, strong self-penned songs with a rich, echo-saturated wall-of-sound guitar.

Taming The Outback soon began recording at Elephant Studios in East London, where they recorded their debut single Blue Heart / Fire & Smoke – now a minor rarity due to limited distribution and a tiny pressing of 500 copies.

However, their public profile rapidly changed when the band attracted local and national press attention with their infamous “crucifixion” publicity shoot – taken (without permission) on Salvation Army land. At the time it was claimed to be in protest over “religious hypocrisy (...)

Approximately half came with a picture sleeve.