I have come to realize that I’m more or less addicted to one too many things on my plate, one too many adventures to be had, one too many ideas, one too many books, and one too many causes to champion. Maybe it’s the adrenalin rush or the welling up of anxiety that makes you feel like you’re on the edge of losing it with your mind skipping from idea to idea like a rock skimming across a flat pond. In fact, for me, I suspect, it’s the tension between flat pond and the skipping rock that draws me back to being over-extended day after day, week after week (well, that and the prodding (and encouragement) of friends like Richard Rothaus, Kostis Kourelis, and Bret Weber. They all at various times feel like the academic equivalent of that friend in college who convinces you to start drinking at 1 pm on a Thursday.)

This is a long introduction, to introduce my first effort at a one-credit pop-up class. 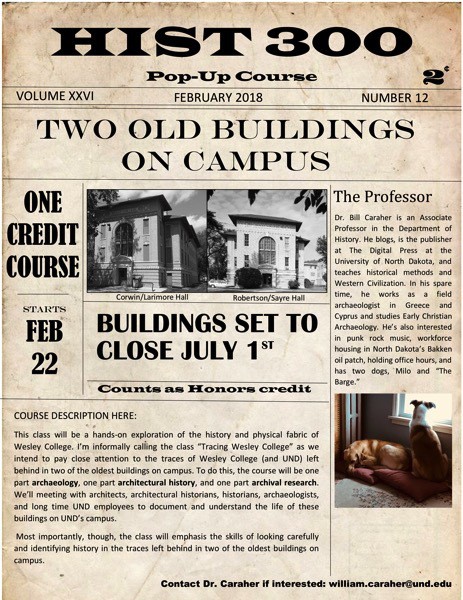 History 300 will focus on two (actually four) old buildings on campus of the University of North Dakota: Roberstson/Sayre Hall and Corwin/Larimore. They’re both hybrid buildings with one part built in the first decade of the 20th century and one part built in the 1920s. They offered housing and classroom space for a hybrid institution: Wesley College. Wesley College grew out of Red River University which had branches in Fargo and Whapeton. In Grand Forks, it worked in symbiosis with UND and offered classes in music, art, and religion. Some of the most famous graduates from UND came through Wesley College in one way or another including Maxwell Anderson. The college functioned as a residential unit that also offered classes and in that way, it worked a bit more like today’s residential colleges in the UK and, say, at the University of Toronto. In 1965, it was absorbed formally by UND and since then, the buildings have served as the homes to various department and university units.

Earlier this year, both buildings were slated for demolition and Corwin/Larimore is empty. Robertson/Sayre is almost empty as well. Because I can’t resist the temptation to document, explore, and investigate, I created a one-credit class to get some students into these buildings before they’re are gone to study and document them. While the outsides of the buildings are on the way to becoming pretty well documented, I’m interested in getting the students to help me notice the traces of use left in buildings that have stood on campus for over a century. The class will focus on the history of the buildings based on archival documents in UND special collections, the history of the architecture of the buildings (and the UND campus, which Kostis Kourelis is already developing), and, more importantly for me, the careful autopsy of the buildings.

Since the class is only one-credit, I can’t expect too much from the students in terms of reading, but I can’t resist including some recommended readings (and I suspect that Richard and Kostis will add to this list!):

Shannon Lee Dawdy’s Patina: A Profane Archaeology (2016).
Laurie A. Wilkie’s The Lost Boys of Zeta Psi: a historical archaeology of masculinity in a university fraternity. (2010)
Timothy Webmoor, “Object-oriented metrologies of care and the proximate ruin of Building 500”in Ruin Memories ed. Bjørnar Olsen and Þóra Pétursdóttir (2014).
Richard Wilk and Michael Schiffer, “The Modern Material-Culture Field School: Teaching Archaeology on the University Campus” in Modern Material Culture: the archaeology of us. Richard Wilk and Michael Schiffer eds. (1981).