Pod and I copied The Beguiled’s demo cassette “Clowns” (1985) onto my computer the other day, as well as another Live side of tracks, which I include here also. I remember The Beguiled, but I never got to see them play much due to the fact I was playing with the Aligatorz at the time…we seemed to move in different circles. But I had heard their cassette. Nice to hear it again after so many years.

Duncan Todhunter (R.I.P.) was on drums; the last time I saw Jav, he and Dung were driving towards Workington to do a practice together, they dropped me off at home. Phil I have not seen for years but I believe he is doing an anti-drug educational programme around the schools in Cumbria. Paul is playing with a band called “Censored” (Pod saw them the other day!).

For those reading this who did not know The Beguiled, they were one of the more popular punk bands around Carlisle in the mid-80s. A whole chapter needs to be written about them…sadly I do not have that info…does anyone?

here is the recording:

Pod also had a live recording done in 1985 also, I think it was Stars and Stripes. The track listing was handwritten on a cassette cover: 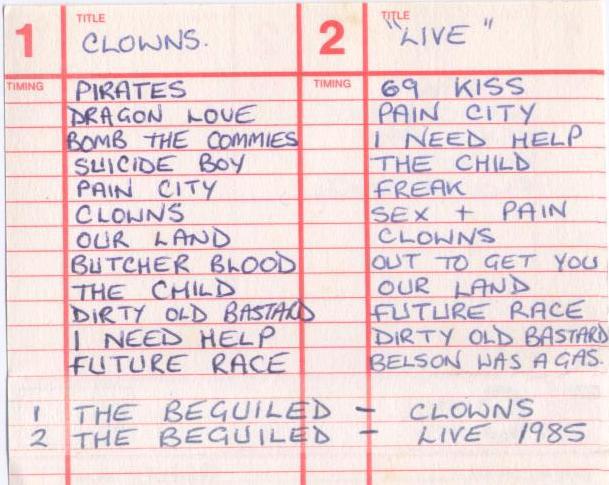 and here is the recording. The first track “69 Kiss” is a studio recording, but the rest are recorded live.

Many thanks to Pod for the cassettes.

some more info added by Sean Todhunter via FB:
“Another great piece from Kevin’s Carlisle Punk Band page featuring another one of my Brother’s, Duncan’s Punk Bands, The Beguiled…. The demo was a cassette only job (as you did back in those days kids, no pro tools or logic or CD burning or MP3 back then) and has largely been lost for the last few decades, they were a solid live act and crowd puller, almost become Stars n Stripes in house Punk band , supporting most major punk acts of the era.. if they had an autobiography, it would be titled..’Blood, Spit N Beers…life in the Punk Rock war zone’

Several gigs were marred by violence but this was par for the course in 80s Carlisle, warring Skinheads, Rival Punk factions, Left vs Right battles were a common feature of Punk Gigs and on several occasions, Dunc would wade in to sort shit out like the time one of the more shit brained Workington lads started on /Irish Bernie and Duncan threw down his sticks and got fired in to a much larger and much older bonehead.

Gigs then, were not like now and bands had to go through a lot of heavy shit just in order to play their set, spitting and dodging flying missile was only half the show but the Beguiled never abandoned a set and always delivered high octane Punk Rock for the people..

Apolitical, their sense of humor was as large as their appetite for outrage and they were more interested in giving people a good show and a entertaining people then preaching to them although some songs like ‘Our Land’ addressed political and social issues.

The Beguiled were Phil, Paul, Jav and our Dunc and were one of the main local punk bands of their era.. their story is long overdue.

Next time anyone Sees Jav, let him know.. that his input would be great as he can tell their story better then I can”

“No Thrills” in concert

Every Smile’s a Lie CD