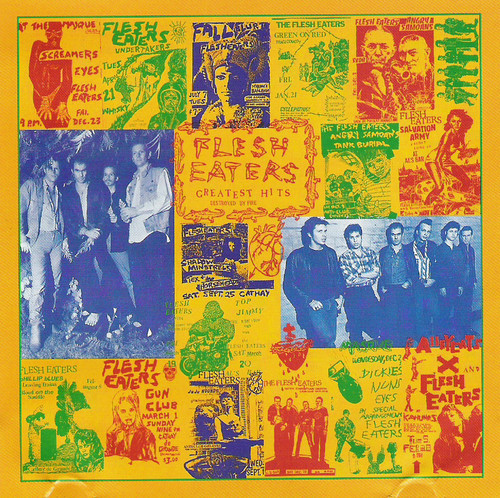 Arising from a punk rock party scene that exploded in the wasted midst of Hollywood tinsel and trash, The Flesh Eaters first mutated into a punk-fueled "roots rock voodoo blues" group (marked by the masterful A Minute to Pray, A Second To Die LP and a classic line-up of LA scene heavies) and later into a "speed metal esoterrorica" four-piece who throttled American hardcore with their mix of amped-up guitar hellfire and rough-hewn Jagger/Richards blues. Singer and band constant Chris D. (Desjardins) was able to sprout new heads for his band every couple of years while keeping a supremely intense, performance-as-catharsis ethos very much alive, and always charting fertile new musical ground. Live, Chris D. would shriek like he was conducting the last performance before Satan’s bloody rapture, and as if he just might be taking the audience down with him. The rock pundits of the day thus brought forth much enthusiasm, enthusiasm now all but buried in the yellowing copies of local fanzines.
Formed in 1978 and disbanded in 1983, when Chris D. started a new project, Divine Horsemen; reformed around 1990 and active till 2003-2004.

The first 500 included bonus 7" with "Divine Horsemen" b/w "Drag My Name In The Mud". Label says "This record is part of the Flesheaters Greatest Hits It cannot be sold separately."