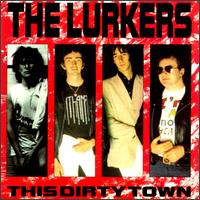 English punk rock group founded in 1976 in Fulham, West London. The band was initially managed by Mike Stone (2) who was working in the North End Rd., Fulham branch of Beggars Banquet retail store.
Since 2010 Esso, Stride and Moore collaborated under the moniker The Lurkers GLM so, alongside Arturo's version, there has been two bands playing and recording under the same name for some time now.