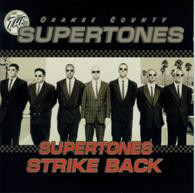 Initially named "The Supertones", but were required to change their name because of a conflict with another band.

The O.C. Supertones performed their last show at Biola University in La Mirada, California on October 7, 2005. They reunited in 2010.