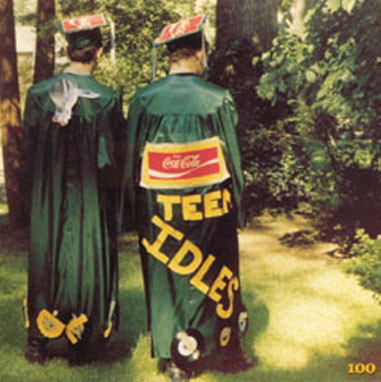 The Teen Idles were a punk rock band formed in 1979 in Washington, DC, by Ian MacKaye (bass), Nathan Strejcek (vocals), Georgie Grindle (guitar), and Jeff Nelson (drums), all high school classmates. The band was born out of the demise of The Slinkees, which featured Grindle, Nelson, MacKaye, and vocalist Mark Sullivan (4), who broke up after Sullivan, a year older than the rest of the band, went to college.

The group played various shows around DC and, in the summer of 1980, travelled to California for 2 shows, getting an eye-full of Los Angeles burgeoning hardcore scene and importing a number of the scene's traits back to DC, including slamdancing. The Teen Idles proved to be influential to many of the younger punk fans in and around Washington DC, inspiring a new wave of bands who called themselves "harDCore".

In late 1980, the band broke up. This mainly due to tension between Grindle and Nelson. Grindle's born again Christian girlfriend disapproved of the band, causing him to question his participation, which brought him into conflict with Nelson, who was an atheist. Also adding to the mix was MacKaye's, who was the band's lyricist, dissatification with Strejeck's performances and his own desire to sing. Following their split, the band took money they had saved from their shows to issue an EP called "Minor Disturbance" on their own the_teen_idles_anniversary.zip

Sleeve notes read:
"The Teen Idles founded Dischord Records in 1980 with the release of the "Minor Disturbance" 8 song 7" EP, so it seems somewhat appropriate to celebrate Dischord's 100th release with a second single from the band some 16 years later. This record consists of songs taken from practice tapes and early demos recorded from late 1979 to mid-1980."