Album: The Best Of The Velvet Underground (Words And Music Of Lou Reed) 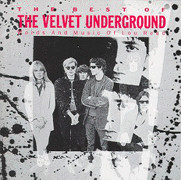 Famous rock'n roll group from New York. Well known for Andy Warhol's artwork and often cited as one of the most important and influential groups of their era.

Inducted into Rock And Roll Hall of Fame in 1996 (Performer)

Angus MacLise was the original drummer, but did not officially record with the band.

A7 taken from White Light/White Heat

B1-B3 taken from The Velvet Underground

Longer fade-outs on "I'm Waiting For The Man", "What Goes On" and "Beginning To See The Light".