Band Name: This Is My Fist

Music Album: A History Of Rats 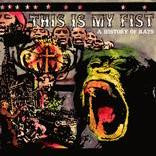 Initially recorded in 2005 by Tim Green at Louder Studios in SF with production help from Adam Pfahler. Tapes were lost then found in 2006, and mixed by Craigums at Dutch Oven Studio in Alameda, CA.