If we are to believe the hype from the TV and various documentaries today about Punk in the 70s and 80s we would think punk had saturated the music charts and was oozing out of every social and cultural orifice in the UK!
That was not my feeling of those times. I remember frequently shouting at the TV, at “Top of the Pops” my frustration at not seeing a punk band that was climbing the charts that particular week. Or, my ear was glued to the “Top 40” on a Sunday evening to hear the latest Countdown on the radio and if any punk singles were played. Another source if information was the various musical press: NME, Sounds, Record Mirror, Smash Hits…

I found it frustrating, like being hungry and being offered left over scraps when ‘they’ felt like it to give it. There was a ‘lack of information’ about punk groups and punk music filtering up to Carlisle, a lack of publicity of the bands I wanted to hear.

I was not an avid music newspaper reader, after being a Boomtown Rats fan, I believed Geldoff’s lyric “Don’t Believe What You Read”. But I bought the papers when there was an article I wanted.

Recently I found a few music papers in the attic. Over the next few weeks I will be uploading a few articles related to punk and what influenced me regarding punk and music in Carlisle.

On the 2nd page of Record Mirror, dated December the 2nd, 1978 is a run-down of the Single Charts within the UK from 1 to 75, a better representation of the music in the charts than TOTP and the Top 40. In those days we had the “Top 40” every Sunday on Radio 1, and we had the “rundown of the Top 30” on ‘Top Of The Pops’ every Thursday.

What is interesting about these music press listings it shows beyond TOTP and the Top 40. So, if you consider that to be in the Top 20, means that “you have made it” (you are getting near the Number 1 slot), then there is very little punk in the UK music scene on December 2nd 1978. Out of the 20 chart slots in the UK there was only 2 punk bands that would have been played on TOTP, and only 5 punk songs that might have been played on the ‘Top 40’… not a UK coup d’état by any stretch of the imagination. From those 5 bands, 3 were climbing the charts (Blondie, Buzzcocks, The Clash) and 2 bands were on the way ‘out’ (X-Ray Specs, Boomtown Rats).

If we look beyond the 40 range, we have 7 other punk bands making their stance amongst the other genres of music. 6 of those bands were on their way ‘out’ of the charts (Jam, Elvis Costello, 999, PIL, Sham 69, Buzzcocks), and only the Rezillos were advancing ‘up’ the charts which would allow them air play; lets face it if you were not in the Top 40 you would not get much air play anyways.

12 punk bands on air, competing against 63 other performers of different musical genres, not a lot really for a UK Punk Explosion.

The UK Album Charts for 2nd December, 1978, tell a similar story. Only 6 punk bands were in the list of 50 places for the Album Chart, although we do have more punk bands ‘climbing the charts’ percentage wise, than the Singles. 2 bands were on their way down the charts (The Clash, The Jam), whereas 4 bands were climbing (Boomtown Rats, Siouxsie and the Banshees, Blondie, Sham 69). The Album Charts did not get the same air play as the Single Charts.

In conclusion, by looking at 1 music paper for 1 week in 1978, it does not tell a story of ‘punk’s invasion’ of the musical culture of the UK’. Anarchy in the December 78… mmmmm not yet! Soul, Disco, Heavy Metal, and music your grandmother would like… was all doing a lot better than Punk.

But I do not feel this was a reflection of what people were feeling or wanting to listen too at that time. I do not think I was the only frustrated teenager wanting to hear more punk music. But it shows what the establishment wanted us to listen too, by the people who controlled the music business. If it was a case of ‘proportional representation’ compared ‘past the post’ statistics, then we might have seen a different chart in the Record Mirror of December the 2nd, 1978. 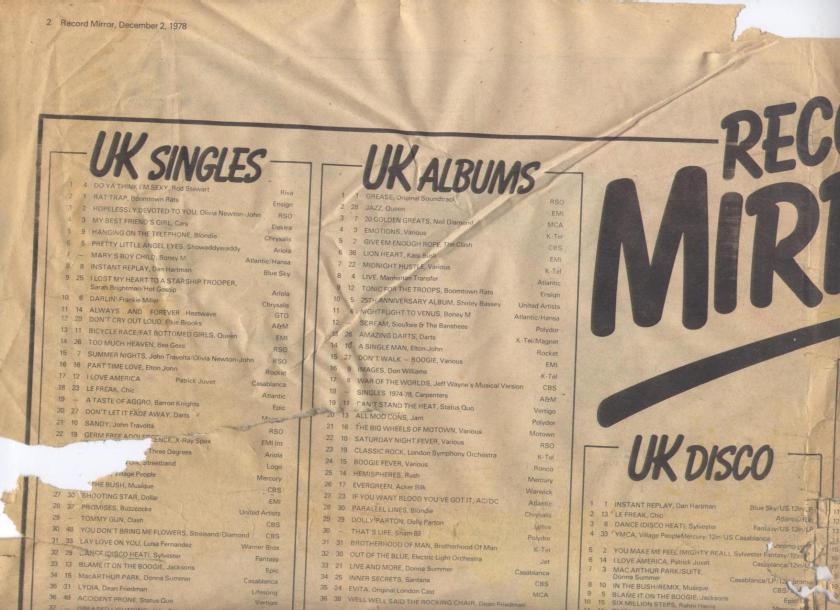 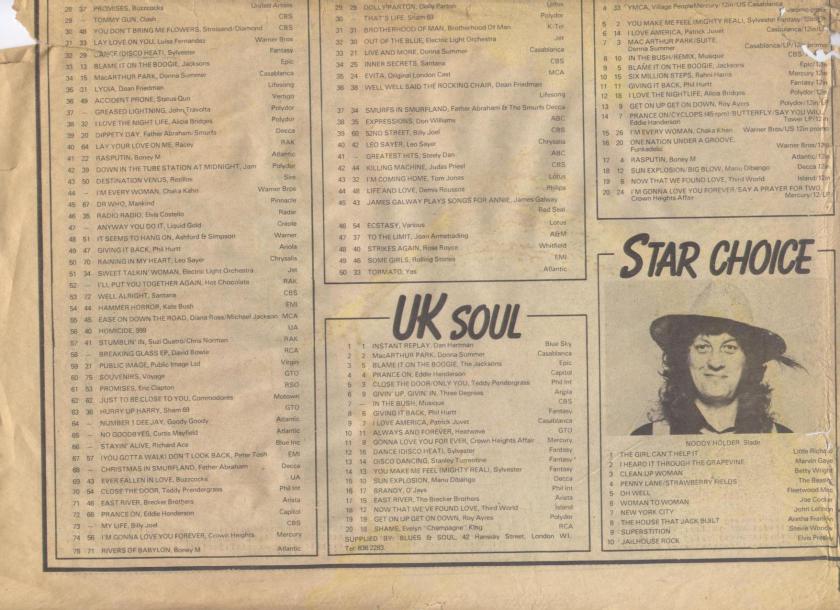