I was able to track down the cassette covers of 2 of the Workington bands I had from the 1980s. I had given the Kevin Akitt cassette, “Reel to Reel” to Pod years ago, and I had a chance of copying it again, with more tracks added this time; so a new mp3 playlist is in the page “Cumbrian Bands”.
The other cassette, I had titled as “Workington” is by the band called “Suspicians Confirmed”. Here listed is also the cassette track list.

Kevin Akitt
I got this recording from someone (I think it was Kevin Akitt) in a theatre in Workington in 1982. Frenzy was playing at an open-mic night and after our slot I spoke to a man who liked our set and was in a band. He gave me 2 cassettes, the first is “Reel 2 Reel” and the other cassette was “Suspicions Confirmed”.
There is a detailed cassette cover listing the tracks and when they were recorded.
“Reel 2 Reel” is as follows: 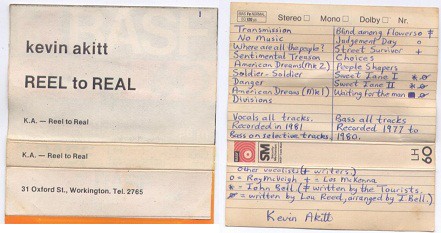 Suspicions Confirmed
The other cassette was also from Workington, I have recently learned that the band is called “Suspicions Confirmed” I found the cassette cover with some information about the track list and titles, but other than that I do not know much. I got it after a gig in Workington with my band called “Frenzy”, I think the guy who gave me it was Kevin Akitt, in 1982.
The members of the band were:
John Bensen Lord – bass (backing vocals)
Steiche – guitar and vocals (acking vocals)
Bun – guitar
Ian Sticks Huffam – Drums