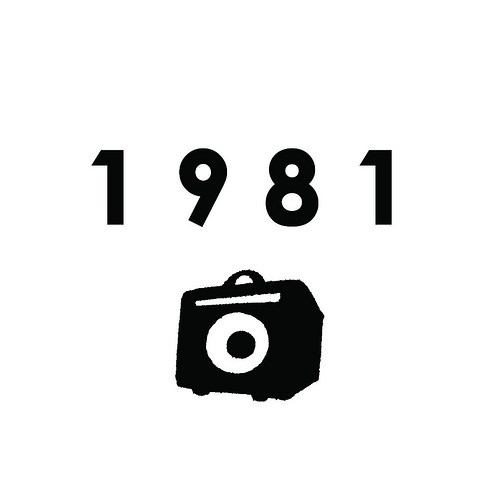 This is the fourth posted mix from the 10-disc, 400+ band ‘1981’ Box Set I put together in 2004-2005.  (For more information regarding the set as a whole and the impetus behind it, check the first mix, ‘Feet’.)  1981 probably wasn’t the peak year for any sort of “pure” cultural or musical strain of what defined “post-punk” as an ethos or as a sound (I’d give that title to 1979).  But I chose to focus on 1981 in such depth because it seemed to me the year that that sound and way of looking at music had spread farthest without diminishing in intensity (few would argue, no matter how much they love the music of 1982, that even in that one year later there was not a bit of a come-down, or at least a diffusion into more disparate strains).  The heroes of the first wave of post-punk were about to retire (like Wire, Buzzcocks, first-run Pere Ubu) but still hadn’t lost a step, and so many others were at their peak (and still many more greats just getting started).  So this mix, ‘Amplifier,’ exemplifies the breadth of post-punk in ’81, when set next to any other mix from the set.  While much of the rest of the set might attest the ascent of the art school or art house over the arena in rock, the artists on ‘Amplifier’ are less artsy, more visceral, less equivocal about the guitar, and probably the punk-est of the post-punk.

But while riffs and chops still had cache amongst the nascent hard-core punks and plain-out rockers found here (not much Oi here, as to my ears it’s usually too reactionary and conservative to qualify as post-punk in any way) there’s still an undeniable artiness creeping between the fuzz boxes that qualifies it as more than simply temporally “post-punk”.  This might be the last mix I think of when I think about the ‘1981’ box set, but when I listen to it again, it always surprises me how much I enjoy it—it’s certainly not “least” of the set.  Looking past the omnipresent guitar, there’s a surprising variety here: drama, irony, silliness, melodicism, anger. And it’s a lot of fun, and it’s what you can play for your little siblings or nieces and nephews who just picked up their first studded belt and got their first faux-hawk, to start them on a journey to wider waters.  Plenty of the names you’d expect are here: the Minutemen, Black Flag, the Meat Puppets, Dead Kennedys, X, Buzzcocks (with their triumphant final single from the original phase), Agent Orange, The Cramps, Mission of Burma, Stiff Little Fingers, The Replacements and Bad Brains.  Also along for the ride are less-knowns like The Gordons, Au Pairs, MX-80, Empire, Josef K, the Zoomers (with thanks to Hyped 2 Death), and Portland’s beloved Wipers.  Toss in a few voodoo oddballs like Flipper, the Flesh Eaters, 100 Flowers, Swimming Pool Q’s, Gun Club, and the early Virgin Prunes, and you’re read to turn it to 11.  Full tracklist and download link after “more…”.