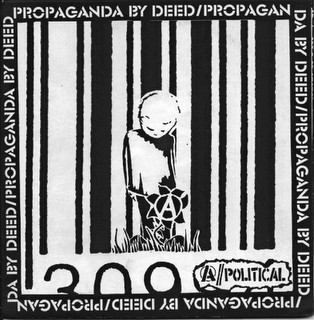 A//Political was an anarcho-punk band from Baltimore. Their style is similar to that of peace punk bands from the early 1980s. The band was the musical arm of the Crasshole Collective which spearheaded the Anarcho-Punk Federation (A.P.F.).

The band, along with the Crasshole Collective, produced several communiques explaining their ideas about a variety of topics often directly related to the themes of their lyrics. The band has also produced several other writings on anarchism and their political beliefs. The band dissolved in 2000. An official retrospective 2008 discography of all 7”s and EPs, and demo tracks was released in 2010.

Recorded at House Of Wheat Studios May 1998

Runout etching on side A reads: "Do You Really Care?"

Runout etching on side B reads: "Fight Back Or Fuck Off!"