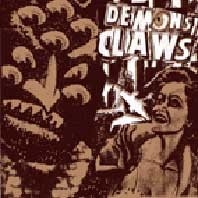 Demon's Claws were founded in 2003 by Jeff Clarke (aka Lester Del Ray and Rudy Stanko), a former member of the Cut Offs and the Normals, taking the group name from a sharply turned piece of track that came with a toy racing car set he owned as a child. Also featuring Pat Meteor on guitar, Ysael Pepin (aka Le Lutin) on bass, and Serge Gendron (aka Skip Jensen) on drums, Demon's Claws released their first single in 2005 for the German P. Trash label, with a self-titled full-length album appearing on the same imprint later that year. The New Zealand-based Perpetrator Records issued the band's next single, and in 2006, Serge Gendron left the band, with B-Man Le Duke (Brian Hildebrand) taking over on drums; they same year they also added a keyboard player, Piero Ilov (Pierre Casteil). The band toured Canada frequently and made occasional trips to the United States, where they formed a mutual appreciation society with manic Atlanta garage punks Black Lips, who took the band on road as an opening act and shared the Norton Records Stones tribute 7" with them. Along with a single for Rob's House Records, Demon's Claws released their second full-length album in 2007, Satan (...)